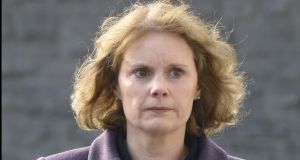 
Savita Halappanavar should have been given stronger antibiotics and medical staff should have been called in earlier when her blood pressure was falling, an expert in microbiology has told her inquest.

Dr Susan Knowles, consultant microbiologist at the National Maternity Hospital at Holles Street in Dublin, was critical of poor documentation at a critical time in Ms Halappanavar’s care at the Galway hospital on Wednesday, October 24th, last.

She also said the Galway hospital’s own guidelines on administering antibiotics in cases of sepsis were not followed for a number of hours on this day. If the flow chart in the guidelines had been followed she would have had effective treatment from 7am on the day, rather than 1pm.

Dr Knowles said there were no clinical symptoms or signs of infection at the time Ms Halappanavar was admitted on October 21st. It was possible however that she had a subclinical infection because her white cell count was raised.

After her membranes ruptured early the next day, the risk of infection increased. However, there was no requirement for intravenous antibiotics before Wednesday, October 24th.

By 6.30am that day, she was obviously clinically septic and was examined promptly, investigated appropriately and prescribed an intravenous antibiotic, co-amoxiclav, within 30 minutes, Dr Knowles told the inquest.

She said she had a concern with this choice of intravenous antibiotic. Many E.coli strains are increasingly resistant to co-amoxiclav, which is used for treating mild to moderate infections. For sepsis, many centres in Ireland would use an additional antibiotic.

“I believe that antibiotics with a broader range of cover for gram-negative bacteria including E.coli should have been administered at that time for suspected sepsis and chorioamnionitis (inflammation of the foetal membranes due to infection).”

However, the antibiotic choice that was used was recommended for maternal sepsis by an important and widely read report published in the UK in 2011, she pointed out.

At this point, decisions about induction of labour or awaiting spontaneous events were a critical part of managing the case, she said. “There is no mention in the note written after the ward round of a plan regarding delivery. One may infer that the decision was to await spontaneous events.”

After that morning’s ward round, there was a delay in recognising that Ms Halappanavar was deteriorating further, she said. Medical staff should have been called earlier when her blood pressure was dropping. It wasn’t clear when the medical team became aware of the results of blood tests. In particular, a finding of a low white cell count should have been available within a short time of the septic workup being performed.

“The team should have been actively managing Ms Halappanavar at that time, including seeking an earlier second opinion regarding the need to deliver, especially when the systolic blood pressure dropped below 80-90mmHg. There was poor documentation in the clinical notes at the time.”

Most of the notes from this period were made retrospectively, she pointed out, and it was difficult to ascertain the precise order of events from them.

From 1pm on Wednesday, Ms Halappanavar received a high standard of care, the witness said.

Eileen Barrington SC, for Ms Halappanar’s consultant obstetrician Dr Katherine Astbury, suggested Dr Knowles’s view was that delivery was not called for before the Wednesday.

Dr Knowles said there wasn’t a substantial risk to her life before then. There were “subtle indicators” of sepsis and chorioamnionitis before this, including a high pulse rate on Tuesday. However, this “in and of itself” was not enough for a termination to go ahead.