Dan Martin: ‘If I can get to Rio in one piece, I have got a really big chance’ 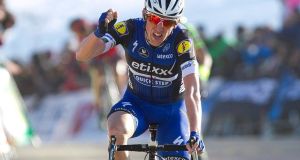 If there were any lingering doubts that Ireland’s Dan Martin could take on and beat the world’s best riders, they were dispelled last month. The location was La Molina in Spain, the event was the Volta a Catalunya, and the context was the first summit finish of that race.

Martin was in the lead group and was up against a who’s who of the top stage race riders. Double Tour de France winners Chris Froome and Alberto Contador were there, along with two-time Tour runner-up Nairo Quintana, top American Tejay van Garderen and Australia’s Richie Porte.

It was the first time this year that the Tour’s big guns had lined out in the same race and everyone had something to prove.

But so too Martin. He hovered close to the front, not showing his hand too soon, but immediately went after Quintana when the Colombian surged.

Froome was broken; Contador too, but Martin had more left in the tank.

He closed up to Quintana and then immediately counter-attacked, blasting clear to take the win.

The spoils were important: in addition to landing his second victory of the year, he also took over the race lead. But, more significantly, he showed he could beat the most successful riders in the world.

The result, his previous stage wins in the Tour de France and Vuelta a España and Classic success in Liège-Bastogne-Liège and Il Lombardia all confirm he has the ability to win the hilly Olympic road race later this year.

Martin is frank that it is a huge goal for him. He considers the route to be perfect for his characteristics.

“It’s definitely good for me,” he told The Irish Times. “I have won Liège, I have won Lombardia. They are the only 250 kilometre hilly Classics on the calendar. So, on those courses, over those sort of distances, I am good.

“If I can have a good Tour de France, get through it healthy and then get to Rio in one piece, I have got a chance. A really big chance. In fact, it is the opportunity of a lifetime.”

Martin speaks with pride about the chance to represent Ireland in Rio, and praises the Irish Sports Council, the Olympic Council of Ireland and Cycling Ireland for their support to date. “It has blown me away,” he admits.

However, there has long been a link with Ireland. He and Neil used to visit regularly and to compete in events here.

As an under-18 rider, he twice rode the Junior Tour of Ireland. In 2003, he came agonisingly close to a stage win, being caught metres from the line. Martin returned the following year and pulled off a stage win. He took the overall victory in the 2004 Gorey Three Day.

The country has made a huge impression on him over the years.

“Ireland for me is one of the places I most love to ride my bike,” he says. “The sun doesn’t come out too often but on a nice day, it is the best place in the world to ride. The roads are tough, yet at the end of it you are rewarded with some beautiful views.

“I have had some of my best memories in Ireland. It is a really positive environment to ride a bike.”

Given that affection and also the interest the Irish federation showed in him as a teen, it is perhaps unsurprising he declared for Ireland. He made the switch in 2006, saying he felt far more appreciated in green.

Two years later, he turned pro and, that same season, dominated the Irish road race championships. Wearing the champion’s jersey for the next 12 months was something he considered an honour.

Since then he’s lived in France, Spain and Andorra. Despite never having lived here, he has long been embraced by the Irish cycling community.

“The affection I have had from them is something else,” he says. “Even when I wasn’t wearing their jersey, when I was still riding for Britain, they supported me. It was always the case that I would change licences as soon as I could.”

A decade on and Martin has become one of the best riders in the sport.

He moved this winter to Etixx-QuickStep, one of the very top teams in cycling. That brings new challenges but, at 29, he’s ready for that.

Dealing with pressure and getting the best out of himself has long been something he has handled well.

Even as a teenager he was driven: in his school exams, he clocked up 11 GCSEs, and got three A levels. He was in the top 0.1 percent in the country in history, and considered going to Oxford to study that subject.

Fortunately for cycling, he decided to follow a different path.

But, this year, his focus is on winning Olympic gold.

Martin knows a big performance in Rio would do much for the sport here.

Asked what needs to happen to encourage more to take up cycling, he believes a greater awareness of it would achieve much.

“It’s all about exposure to the sport,” he says. “Obviously it helped having the Giro d’Italia start here a couple of years ago. But things can improve a lot if we can get cycling on national television, and glamorise it the same way that the mainstream sports have had.”

His feeling is that once people try cycling they will be hooked.

“Every person has ridden a bike at some stage in their own lives,” he says. “The bike is the first real feeling of freedom that you get as a child. It is the first time you can explore the outside world almost without any boundaries.

“That is a sensation that people rediscover when they take up cycling at a later age. It’s very powerful. And if you can just keep it going from a young age, encouraging people to stay with cycling, that is the way you make more professional cyclists.”

“It is a huge commitment to try to make it,” Martin explains. “It is just a little helping hand. When you are racing in Europe on your own, living overseas trying to be a professional cyclist, it is very lonely.

But if you know that people are thinking about you and are backing you, it gives you a little extra bit of motivation to stay out there and keep going.”