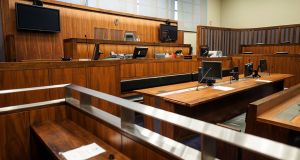 A judge has refused to release a recovering drug addict out on bail after he told the court his pregnant partner has gone into self isolation with Covid-19 symptoms.

Micheal Bayly (26) is in custody awaiting sentence at Dublin Circuit Criminal Court after he pleaded guilty to carrying out a street robbery on March 29th, 2018.

Bayly, of Tyrconnell Road, Inchicore, Dublin failed to appear for his sentence hearing last November and a bench warrant was issued for his arrest. A new sentence date of April 21st was set after gardaí­ arrested him on the warrant.

His partner, who is pregnant with their third child, has exhibited symptoms of the coronavirus and is in self isolation in a hotel while waiting on a test. The children are being cared for by their extended family.

He said he knows his release will only be short term but he wants to get out and help with the care of the children while their mother is unwell. Mr Spencer asked the court to grant bail on compassionate grounds.

Detective Garda Paul Geraghty told the court he was objecting to bail because he did not believe Bayly will show up for his sentencing. Bayly has received a total of 24 bench warrants, four of them in relation to the 2018 robbery.

Mr Spencer said that his client was in the grip of a drug addiction when he previously failed to show up for court.

Addressing the court himself, Bayly said he was “heavy on the drugs” at the time but is now clean.

“Hell or high water, I will turn up to court,” he said. He gave his testimony after swearing an oath by holding his hand above the bible, rather than holding it up.

Judge Greally said these are difficult times for everybody but noted Bayly has previously given assurances to other judges when he was granted bail.

“It sounds to me that his children are being cared for by the right people under the right circumstances and that he would be of limited assistance,” she said.