Coronavirus variants with no link to travel detected in State 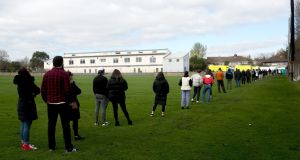 Members of the public line up to get tested at the pop-up Covid-19 test centre in Crumlin, Dublin, on Friday. Photograph: Gareth Chaney/Collins

Coronavirus variants classified by public health officials as being “of concern” are being detected in the State without a link to international travel.

The issue is noted in the minutes of a National Public Health Emergency Team (Nphet) meeting last month, which say that “complex contact tracing” of these cases was ongoing.

According to minutes posted this week, Nphet heard that the Health Protection Surveillance Centre “continues to follow-up probable cases of new variants in clusters of new outbreaks. Of note, ongoing complex contact tracing of some clusters of probable variants of concern have not yet found a link to international travel."

Dr Cillian de Gascun, director of the National Virus Reference Laboratory, on Friday expressed concern about Covid-19 variants being identified without a link to travel.

“We have an opportunity to try and control the importation of the other variants of concern,” he said. “Ideally we would like to ensure that there aren’t ongoing networks of transmission of these variants in the community that we don’t know about.”

Dr de Gascun said the “greatest concern” would be an undetected case of a variant in a care facility, workplace or school leading to a “super-spreading event” .

“The problem is if we don’t contain it, it is only a matter of time before it gets into a super-spreading event,” he said, adding that one of the reasons for setting up walk-in test centres in some areas was to try to detect variants.

A public health source said the inability to trace a travel link “suggests we have some transmission within the community” and that perhaps “the introductions are from countries that we have higher levels of travel linkage” with.

Figures released to Social Democrats co-leader Róisín Shortall show 1,524 passengers arriving in Ireland in a two-week period last month had a travel history associated with one of the designated states.

Ms Shortall said warnings on transmission showed the need to be “absolutely forensic” in tracing back cases where the origin is unknown.

Discussions are continuing this weekend over mandatory hotel quarantine after the Government decided against adding the US and some EU member states to its list of high-risk countries.

Nphet minutes show some members of the group continue to advocate for a broader approach including “the application of uniform quarantine measures to all countries”. However, deputy chief medical officer Dr Ronan Glynn said the group had to be “pragmatic” on the issue.

Officials are said to be considering increasing the number of hotel rooms available for quarantine as more countries are added to the list. Sources said adding more rooms through the existing contract or a new tender would be considered if necessary. A cap on arrivals is not currently being considered but would not be ruled out if required – although it is seen as a last resort.

Meanwhile, the Government faces the prospect of industrial relations unrest over its decision to reorganise the vaccine prioritisation list on age grounds.

There have been discussions among teacher representatives about the possibility of bringing a joint motion to their annual conferences next week raising the prospect of industrial action. Under proposals being considered, unions would consider balloting for strike action if the Government did not agree to vaccinate teachers by the end of the current term.

The Garda Representative Association said “significant numbers of surplus vaccinations” had been made available to gardaí following a deal it reached in recent days, which allows members to avail of leftover doses at the end of immunisation sessions.

Gardaí are engaging in a massive policing operation over the Easter weekend aimed at dissuading people from travelling outside their localities and gathering in groups. Health officials and politicians appealed to the public to follow the Covid-19 guidelines amid concern that increased mixing could lead to a rise in infections. Eight more deaths of people with the disease and a further 591 cases were reported on Friday.