Children’s heart surgery to be centralised in Dublin 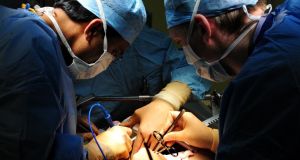 When the scheme is fully implemented, children’s heart surgery for the whole of the island will take place at Our Lady’s Children’s Hospital in Crumlin, Dublin. File photograph: Rui Vieira/PA Wire

Ministers for Health in the North and South have endorsed proposals to establish an all-Ireland children’s heart surgery centre in Dublin.

The current children’s cardiac surgery centre operating from the Royal Belfast Hospital for Sick Children is to cease because it is no longer sustainable.

The new scheme to centralise children’s heart surgery in Dublin on an all-island basis will be phased in over the next 18 months, the North’s DUP Minister of Health Jim Wells said today.

Mr Wells and Minister of Health Leo Varadkar have accepted the proposals from an international working group (IWG) on how to deliver “safe and effective cardiac care” for children in Ireland.

When the scheme is fully implemented, children’s heart surgery for the whole of the island will take place at Our Lady’s Children’s Hospital in Crumlin, Dublin. A cardiac centre of excellence will be set up in Belfast to provide diagnostics and aftercare to Northern-based children with congenital heart defects.

Some 400 children from the Republic and 140 from Northern Ireland require heart surgery each year. The IWG experts concluded that based on these figures, the operation of two surgical centres in Belfast and Dublin could not be justified.

Mr Wells said a single centre was a “solution which will deliver a surgical service which would see children treated in accordance with the highest standards of safety”.

He said the model provided “significant opportunities: for enhancing the support available to families; for involving their representatives, as well as clinicians, in governance arrangements; and for improving communication and the flow of information between clinical teams in Dublin and Belfast”.

“The proposed model is absolutely focused on patient care and safety, and both my predecessor (Edwin Poots) and I have been motivated throughout this work by the desire to provide the best possible standard of care for the people of Northern Ireland,” said Mr Wells.

Some parents of children had expressed concern about Belfast losing its children’s cardiac surgery services, while there was also some, more minor, unionist complaints about this form of North-South co-operation.

Said Mr Wells: “The simple reality is that we cannot reach these standards alone. This is the clear message coming from the work of the IWG, and I cannot, and indeed will not, ignore their expertise and experience in reaching this view. Patient safety is central to that decision.”

Mr Varadkar and Mr Wells, in a joint statement, formally accepted the recommendations of the IWG which was established by their respective predecessors, Dr James Reilly and Edwin Poots.

“The implementation of the recommendations of the IWG report provides a key opportunity for joint cross-Border working in a critical service area which will benefit the people in both jurisdictions,” they said.

The IWG was chaired by Dr John Mayer jnr, senior associate in cardiac surgery at Boston Children’s Hospital. “Through our engagement with clinicians, parents, managers and political leaders in Belfast and Dublin, we recognised a real willingness to make an all-island solution work,” he said.

“Evidence from other countries tells us that the concentration of surgical and interventional paediatric congenital cardiac cases is associated with improved outcomes for patients and we believe that this model will deliver improved outcomes for children in both jurisdictions,” added Dr Meyer.