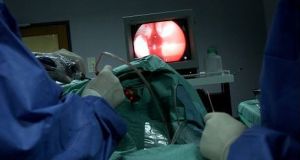 Beaumont Hospital has said it makes every effort to admit patients based on clinical need after it emerged that some patients had been turned away because of a lack of beds and theatre access.

The head of the neurosurgical unit, Dr Mohsen Javadpour, said there were no beds last Friday for nine patients with malignant brain tumours who were awaiting transfer from other hospitals.

He said there were also “many patients at home on the waiting list with brain tumours that are causing deterioration in function [eg, vision], or patients with brain aneurysms which can rupture at any time and cause death or disability”.

A spokeswoman for the hospital said every effort was made to admit patients based on clinical need. The neurosurgery unit operated at close to full capacity, and on average admits 200 patients a month.