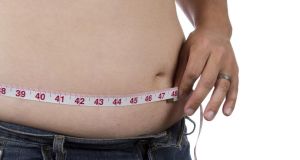 Fifty-two per cent of older adults are “centrally obese”, meaning their waist circumference is “substantially increased”, while a further 25 per cent have an “increased” waist, according to the Irish Longitudinal Study on Ageing study.

They may have lost euros by the bucket-load but older Irish adults are piling on the pounds. A new survey shows almost four out of every five over-50s are overweight or obese.

A similar proportion of those aged over 50 have an “increased” or “substantially increased” waist circumference, according to the Irish Longitudinal Study on Ageing (TILDA), a national study of more than 8,000 people led by Trinity College Dublin.

Obesity in older Irish men is as common now as among their counterparts in the US, and well ahead of English men. Irish women have some catching up to do on the US, but obesity levels match those found among older women in England.

Based on body mass index measurement, 36 per cent of Irish over-50s are obese and a further 43 per cent are overweight. Because the reliability of BMI as a way of measuring obesity in older people has been questioned, the study also measured waist circumferences, and came up with similar results.

Fifty-two per cent of older adults are “centrally obese”, meaning their waist circumference is “substantially increased”, while a further 25 per cent have an “increased” waist.

The well-documented health effects of increased weight are apparent among the adults taking part in the survey. Twenty-one per cent of centrally obese men report at least one cardiovascular disease, compared with 14 per cent of men with a normal waist circumference. Corresponding rates for women are 17 per cent compared with 11 per cent.

High blood pressure is found in 48 per cent of older men with central obesity, compared with 22 per cent of those with a normal waist circumference. Levels of arthritis and the frequency with which older adults go to the GP or take medication also increase as their waists expand.

More men than women are obese, but a higher proportion of women have a “substantially increased” waist. The poorer you are, the more likely you are to be obese, but this relationship is much stronger among women.

Lead author of the report Dr Siobhan Leahy said the findings showed worryingly high levels of obesity, but also the impact of these levels on health and everyday activity among the over-50s. Weight issues are more prevalent among over-50s than in the general population, she pointed out.

“While this age group is already more likely to be affected by age-related illness, frailty and cardiovascular disease, these conditions are exacerbated by the presence of obesity and significantly higher levels of disease and disability are evident in obese individuals. Our study highlights the combined impact of the obesity crisis and a rapidly ageing population on health and health service demand.”

A 2012 study estimated that overweight and obesity issues cost the economy €1.3billion through increased use of health services, absenteeism and early deaths.

The authors say a greater focus on health promotion and prevention is required, to not only improve health and wellbeing, but also to ensure the future sustainability of our health system.