About 750,000 in Ireland suffer from migraine, doctors say 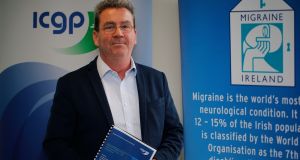 About 750,000 people in Ireland suffer from migraine and the statistics are becoming “worse and worse”, a leading consultant neurologist has said.

Dr Martin Ruttledge was speaking at the launch of a new quick reference guide to migraine, which he co-authored with Dr Mary Kearney and Esther Tomkins, published by the Irish College of General Practitioners (ICGP) on Tuesday.

Dr Ruttledge, said about 40 per cent of all females would get migraine at some stage in their lives and that the World Health Organisation now considered migraine the second most disabling medical condition of all non-fatal diseases.

“Our statistics are getting worse and worse as time goes on. We think there’s probably about three quarters of a million migraineurs in Ireland, hopefully most of them not very disabled,” he said.

He said the disability could not be seen on scans or measured by blood tests or X-rays.

“It’s all about just sitting and talking to the patients,” he said.

A 2017 report by the European Brain Council said that for each million of the population, Europe loses an estimated 400,000 days from work or school every year to migraine alone. It estimated the cost of headache disorders was well in excess of €100 billion per year.

“Migraine can cause very significant disability. After back pain, it is the second most common cause of disability in women aged between 15-49 years,” Dr Kearney said.

“This can be the most demanding time of women’s lives, both personally and professionally.”

She said, however, there was hope for migraine sufferers and that new treatments were becoming available.

“We hope this guide will help give doctors a greater understanding of migraine, and improved tools in the assessment of headaches which will help them identify cause of headache.

“Because headache is so common (90 of the population), people can often misunderstand that there are very serious forms of migraine,” Dr Kearney added.

Fine Gael TD Maria Bailey, who suffers from migraine, said the condition could be managed successfully.

“Diaries are a crucial component to understanding your triggers, lifestyle and type of migraine. With the right combination of treatment, and tailored lifestyle for a specific patient it can ease the debilitating effects of migraine for some, there are many options of treatments available and it can take time to find what works best for you,” she said.

The Migraine Quick Reference Guide is available publicly on the website icgp.ie