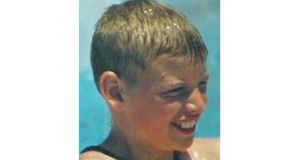 Gardaí investigating the murder of 11 year-old Cork schoolboy, Robert Holohan, have reportedly  made some progress in the hunt for the boy's killer.

Reports this morning indicate gardaí may have recovered a set of fingerprints from Robert's bmx bicycle and from plastic sheeting found with his body.

The investigation into the murder is understood to be focusing on a small number of suspects in the belief that he may have been killed during a row by someone he knew.

Gardaí have reissued an appeal for information on a white pick-up truck seen parked midway between where Robert was last seen and where his BMX bike was later found.

Supt Kevin Donoghue of the Garda Press Office said: "We are satisfied with the progress that we are making in this investigation and we will confirm that we are absolutely determined to resolve this as satisfactorily as we can in the circumstances."

He said detectives wished to speak to anyone with information on a dirty white coloured pick-up truck, which was "seen with its door open", in Ballyedmond near Robert's home on the afternoon of Tuesday, January 4.

"In addition to that and we have renewed our appeals and we are looking for anyone who was in the Ballyedmond area driving walking or visiting, whom we haven't spoken to, to call us and it is really for us to decide of what assistance that is as opposed to them," he said.

On reports that an arrest in the investigation was imminent, he said: "As of this minute there is no significant development expected but that might change in an hours time it might change five-hours time, it could change in a day or two."

The Superintendent said he would not confirm or deny reports that the schoolboy knew his killer.

"We in the investigation team know precisely the people we are looking at and we are progressing each of those as we go along.

Supt Liam Hayes disclosed on Friday that following appeals made by the Garda at a press conference on Thursday night, they had received close to 100 new calls with information, including a report of a white pick-up truck in the area where Robert disappeared.

Representatives of the Taoiseach, Mr Ahern, and President Mary McAleese, joined thousands of mourners at Robert's funeral in Midleton yesterday.

The post-mortem examination revealed no evidence of sexual assault and gardai are understood to feel it is less likely that he was abducted and murdered by a sex offender. The post-mortem, carried out by the State Pathologist, Dr Marie Cassidy, confirmed that Robert died from asphyxiation.

The Taoiseach, Mr Ahern, spoke by telephone yesterday to the family. A spokesman for the Taoiseach said: "He wanted to speak to them to pass on his sympathies, sympathies that are shared by everybody in the country."

Gardaí and army personnel are to continue searches today in the fields and ditches near Inch Strand in a bid to discover clues to the killer.

More than 50 detectives are following up 1,000 separate pieces of information in the murder investigation.