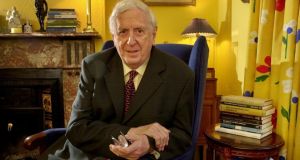 Europe Day was marked yesterday with the inaugural Garret FitzGerald Memorial Lecture, when the former taoiseach was praised for making his greatest contribution to Irish foreign policy by embracing deeper political integration in Europe.

Chairman of the Institute of International and European Affairs Brendan Halligan said that positioning Ireland as one of the pioneering group of states that was part of the consensus on the direction of the union, even when it put other national objectives at risk, was his finest achievement.

He had made Ireland a “psychological insider” within the European Union, a state that supported deeper political integration. Mr Halligan pointed to a crucial moment, the European Council meeting at Milan in 1985. French president François Mitterrand and chancellor Helmut Kohl were both pressing to go beyond a simple common market to create a real unified “internal market”.

The change was resisted by British prime minister Margaret Thatcher. Despite a personal intervention by Mrs Thatcher, Dr FitzGerald supported the measure and sided with the six founding members of the union, not the newer members.

It was a watershed moment, said Mr Halligan.