There are 30, and possibly more, Fine Gael parliamentarians who are uneasy about the suicide clause 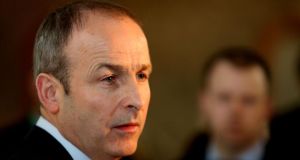 A file image of Fianna Fáil leader Michael Martin. His party has welcomed the publication of the Protection of Life During Pregnancy Bill in language that suggests it might support the legislation. Photograph: PA

Fianna Fáil has hinted that its leadership may take a different stance to its membership on the proposed legislation to make abortion permissible in limited circumstances.

In a statement issued at lunchtime, the party welcomed the publication of the Protection of Life During Pregnancy Bill in language that strongly suggested at the possibility of support for the legislation during its passage through the Oireachtas.

This is notwithstanding its membership overwhelming rejecting the inclusion of a suicide threat in abortion laws at the party’s ardfheis last weekend. Four motions setting out strong anti-abortion stances were strongly backed by delegates.

In the statement, Fianna Fáil’s health spokesman Billy Kelleher said the Bill bore many similarities to the Protection of Human Life in Pregnancy Bill 2001, but with the addition of a panel of experts to assist women who are suicidal. That Bill was published by a Fianna Fáil-led government.

Elsewhere, the political response to the draft legislation on abortion published late last night has been cautious and a little mixed so far with many TDs and Senators saying they will need to take some time to study the text before expressing strong opinions.

The Heads of the Protection of Life During Pregnancy bill has been widely welcomed within the Labour Party, with the exception of one or two parliamentary party members.

However, there were mixed reactions from within Fine Gael. The party’s tier of Ministers all welcomed the publication and said it would allay concerns over suicide as did a number of deputies including Jim Daly and Tom Hayes.

However, a number of its TDs and senators who have publicly expressed disquiet at the inclusion of a suicide threat repeated their concerns this morning. They included Mayo TD Michelle Mulherin and Galway senator Fidelma Healy Eames.

Sinn Féin gave a very strong indication that the party will support the legislation. Its leader Gerry Adams said that Sinn Féin was determined that the legislation should provide “clarity for medical practitioners and protection for pregnant women whose lives are at risk”.

Asked about whether the party would allow a free vote, Mr Adams said that whatever decision the party took would be binding on all its members.

There are 30, and possibly more, Fine Gael parliamentarians who are uneasy about the suicide clause. It will become more apparent at the party’s weekly meeting this evening what the mood of the party is and how many of those TDs and senators have had their concerns assuaged by the published draft.

The party leadership has conceded privately that others may join the Galway West TD Brian Walsh in not supporting the legislation but it is not possible to gauge the numbers at this stage.

On the Labour side, Senator Ivana Bacik, a prominent campaigner on this issue, today welcomed the publication of the heads of bill, saying it would give greater clarity in the law for women and doctors.

“It has been drafted in a realistic manner which complies with our obligations to women both under the X case and under the ECHR judgment. I am glad that we are finally facing up to our responsibilities as legislators on this pressing issue.”

Labour TD for Waterford Ciara Conway said calling for legislation to deal with the X Case was neither politically popular nor popular from the pulpits but it was the right thing to do.

However the Roscommon Labour Party senator John Kelly said he did not know whether there was an absolute need for legislation and that medical guidelines might have sufficed.

Senator Kelly, who has strong anti-abortion views, also expressed reservations about the inclusion of a suicide clause and also expressed unease about comments made by party colleagues Aodhán Ó Ríordáin and Anne Ferris report last weekend saying they believed in further liberalisation of the law. (They made the comments to a young woman who misrepresented who she was and secretly recorded their conversation. The comments were carried in The Sunday Independent.)

“If legislation was required it should be airtight and involve a case where the person has to prove suicidal intent,” said Mr Kelly.

“What I read in the Sunday papers, if that is the long term agenda of the party, I am against it. I am not one for opening the floodgates on abortion,” he said.