Wexford puts wild flowers back on the roadside

Zealous local authorities persist in giving roadsides a short back and sides. The Model County is bucking the trend 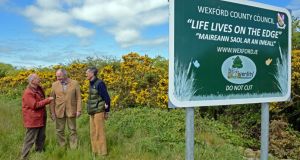 A friend who now lives in Los Angeles fondly remembers early summer in Ireland as the time “when the roadsides look as if they have been draped in lace”.

She is thinking of the delicate white umbels of cow parsley that carpet the margins of country roads in May and June, and the hawthorn that washes the hedgerows above them in a creamy mist.

Sadly, on her return visits her memories often clash with the more common reality today: bare verges mowed like billiard tables, hedgerows not pruned but ripped, torn and battered by crude machine cutting.

This happens again and again, all over the country, and right in the middle of the season for wild flowers and nesting birds. And it happens despite increasing recognition of the environmental and economic values of robust hedgerows and verges.

They provide vital corridors for wildlife between our fragmented woodlands and are home to many species in their own right, ranging from great trees to small flowers, from mammals to microfauna in the soil. They also provide “ecosystem services”, such as buffering against flooding.

Farmers are constrained by law from cutting their hedgerows between March 1st and August 31st under the 1976 Wildlife Act, but zealous county councils and road authorities persist in giving our roadsides a permanent short back and sides.

Will Warham, whose farm at Jamestown in Co Wexford doubles as a nature reserve, had often wondered why this should be so. Some years ago a chance meeting with a local road engineer shed some light.

Health and safety is an obvious concern, and it makes sound sense to keep lines of vision clear on our drunkenly swerving back roads. But he also learned that the rubbish tossed out of cars accumulates unseen in dense summer growth, and becomes a nightmare to clean up come the autumn. This is a vicious circle: careless private pollution becomes a motive for further environmental degradation in the form of constant mowing and hedge-cutting by the public authorities.

He also learned a third and more surprising reason for the constant strimming: there was a perception that tourists arriving off the boat in Rosslare expected to find our hedgerows “neat and tidy”.

He reckoned, along with his An Taisce colleague Brian Rickwood, that a lot of visitors might prefer to see the verges studded with colourful blossoms. Both men sit as advisers on strategic policy committees for Wexford County Council, and they began to discuss how they might bring colour and biodiversity back to the roadsides.

“We seem to have developed this ‘tidy’ approach to life without thinking it through,” says Rickwood. “We treat public natural areas as though they were lawns or something. But we found that many people do remember the beauty of spring and summer wild flowers from their youth, and wonder where they’ve gone.”

Warham and Rickwood found an ally on the council administration in Niamh Lennon, who was developing a biodiversity plan for the county, and has now produced an impressive online pamphlet on the value of hedgerows.

“The biodiversity plan gave our ideas a bit of muscle,” says Rickwood. Their discussions developed into a quite radical but simple plan to brighten up at least a few stretches of road in the county.

Lennon came up with the idea of focusing on a different biodiversity theme for every year; the theme for 2013 is hedgerows. The centrepiece is an aptly titled scheme, Life Lives on the Edge, which has just been launched. There will be no verge-strimming and hedgerow-hacking on at least four stretches of Wexford roadside for the spring and summer this year, and with luck in years to come.

The locations for the four pilot areas have been selected by road engineers. With safety still in mind, they are all on relatively straight stretches with few entries and exits, on national roads in the areas of Tagoat, Crossabeg, Scarawalsh and Barntown. Their boundaries are marked by signposts with Life Lives on the Edge at either end of the revegetated stretches.

Although there was some initial resistance to the idea, Rickwood says he has been pleasantly surprised by the positive approach of the council and the National Roads Authority.

“Thinking on the environment has changed,” agrees Lennon. “Ten years ago the outcome might have been very different. Environmental teaching in schools is trickling into people’s homes, and they are taking issues like this much more seriously. The project is now universally welcomed by council members.”

No direct seeding is involved in the project; its success depends on many plant species having remained in the seed bank and on their springing to life under the new regime. Fresh seeds from other areas will also be brought in by birds.

The scheme will be science-based, says Lennon, starting with a recent baseline survey that has established what plants are already present, and monitoring what new ones appear this year and in future.

Other counties are apparently taking notice of the scheme. It would be a welcome development if the roadsides of the Model County became a biodiversity model for the rest of the country.