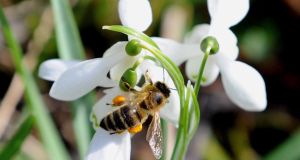 The energy neutral smart beehive created by the UCC students can autonomously monitor the activity of the bee colony and conditions within the beehive. Photograph: Owen Humphreys/PA Wire

A project by a group of University College Cork (UCC) students has won a global competition for using smart technology to help the plight of the humble honey bee.

The students created an energy-neutral smart beehive for the IEEE /IBM Smarter Planet Challenge 2014. The competition organisers had asked students worldwide to come up with an innovative solution to a grand challenge facing their community.

The energy neutral smart beehive, currently in its first pilot phase, can autonomously monitor the activity of the bee colony and conditions within the beehive.

The data, which are stored in an active beehive, are protected through traditional methods including cryptography. The bees also help protect the data.

The students’ research will allow bee keepers to monitor their hives at times that were previously difficult or impossible such as during the night, heavy rain or in the depths of winter.

As part of the competition the student projects had to fit into one or more key areas, including: big data/analytics, cloud computing, cyber security or mobile technologies.

The prize-winning UCC project, entitled: (2B) OR!(2B): From the beehive to the cloud and back, was based on a Boolean theme and was also inspired by Shakespeare.

UCC president Dr Michael Murphy said mathematician George Boole’s theories of logic and probabilities are as powerful today as they were back in the 1800s.

“I am delighted that his work has inspired our current students to create novel solutions to an urgent global problem and helped them win an international competition in the process.”

The IEEE/IBM Smarter Planet Challenge competition is run by the largest engineering organisation in the field, the Institute of Electrical and Electronic Engineering, and the €5,000 prize was sponsored by IBM.