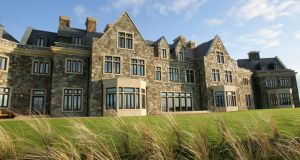 The Lodge at Doonbeg Golf Club, Co Clare. Documents lodged with Clare County Council show the wind farm will be visible from Donald Trump’s golf resort, on which he is planning to spend up to €45 million. Photograph: Kieran Clancy/PicSure

US billionaire Donald Trump is in dispute with a firm that is planning to erect a wind farm near his Doonbeg golf club on the Co Clare coast. Clare Coastal Windpower Ltd has lodged fresh plans with Clare County Council for a nine-turbine wind farm 2km from Doonbeg village and 4km from the the Greg Norman-designed links course.

The 413ft-high turbines are nearly 20ft higher than Dublin’s Spire. The lodging of the plans follows Mr Trump declaring on his well-publicised trip to Clare in May that the council had “killed” the prospect of wind turbines being erected near Doonbeg.

Documents lodged by the firm with the council show the wind farm will be visible from Mr Trump’s golf resort, on which he is planning to spend up to €45 million. Some 23 west Clare landowners stand to receive an annual dividend from the wind farm.

The executive vice president at the Trump organisation, George Sorial, said yesterday: “We will examine the planning application in the next number of days and if we conclude that it jeopardises our investment at Doonbeg, we will do whatever is necessary to fight it and protect the beauty of our site.”

The new plan is a scaled-down proposal of a 45-turbine plan that was refused on a number of grounds last year by An Bord Pleanála. The plan created bitter divisions in the Doonbeg community and the golf club was one of the most vocal opponents against the plan.

According to the Environmental Impact Statement (EIS) lodged with the new plan, “it is not anticipated that the proposal will cause any negative impact to tourism in the area”.

According to the promoters, the wind farm will supply sufficient electricity for 14,175 households. A decision is due on the application in October.