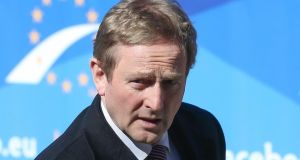 Enda Kenny arrives for a meeting of the European People’s Party (EPP) ahead of a European Union summit, in Brussels yesterday. Photograph: Julien Warnand/EPA

In a letter sent to European Council president Herman Van Rompuy ahead of the meeting, the Taoiseach highlighted the importance of the North-South interconnector, as well as ongoing discussions with the UK and France about the export of energy from Ireland.

On the EU’s climate change package for 2030, the Taoiseach wrote: “Any divergences between EU and national modelling results should be addressed in a transparent and consistent manner to ensure equitable sharing among member states and the avoidance of replicating mistakes made in relation to Ireland in the setting of 2020 targets.”

Under the current climate change package, 16 per cent of Ireland’s consumption of energy must come from renewable sources by the end of the decade, a target described as disproportionate by Energy Minister Pat Rabbitte.

The EU has made progress in improving its energy security after gas crises in 2006 and 2009, when rows over unpaid gas bills between Kiev and Moscow led to the disruption of supplies to western Europe. However, it has not managed to reduce Russia’s share of European energy supplies.

While any Russian supply outage would have less impact than before, Russia provides around one third of the EU’s oil and gas. Some 40 percent of the gas is shipped through Ukraine.

“It is all about making the EU stronger as a whole versus energy exporters,” Poland’s prime minister Donald Tusk said as he arrived for the second day of the summit in Brussels where leaders dedicated the morning to energy issues.

Leaders are expected to call on the European Commission, the EU executive, to draw up detailed proposals by June on how to diversify away from Russia in the short and long term.