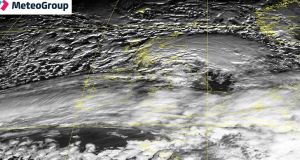 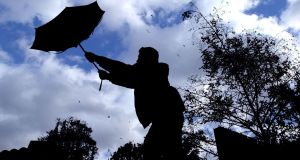 Met Eireann has issued weather alerts as Storm Clodagh passes over the country with gusts of up to 130km/h Photograph: Kirsty Wigglesworth/PA Wire 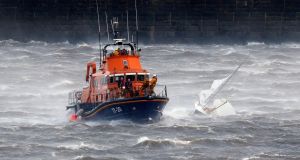 Thousands of homes have been left without power following the passage of Storm Clodagh across the country on Sunday.

As a the storm moved into Scotland, a Met Eireann status orange wind warning came to an end on Sunday afternoon. The storm was expected to bring wind speeds of 60 to 80 km/h forecast and gusts of 100 to 130km/h..

Status orange is the second most severe warning level and is explained by Met Éireann as “weather conditions which have the capacity to impact significantly on people in the affected areas”.

A general status yellow alert, the lowest level, for weather also ended on Sunday afternoon as heavy rain and showers hit the coutnry throughout the day.

On Sunday evening winds are expected to ease and it will be less windy overnight, Met Eireann said. However it will be cold with temperatures of between one degree nd five degrees. It is forecasting frost in some places and some falls of sleet and snow over Ulster. It will become windy again by morning along the south and west coast.

Gardaí have urged all road users to be careful and have urged extra care near waterways and on cliff walks.

AA Roadwatch said there were high winds reported on all motorways with wet road conditions across the country.

Limerick City and County Council has urged people to avoid travel where necessary and to pay attention to Met Éireann’s weather advisory.

Clodagh is the third named storm of the new naming system agreed between British and Irish authorities. It was preceded by Abigail and Barney.