Work marks first PPP road project to be signed since 2007 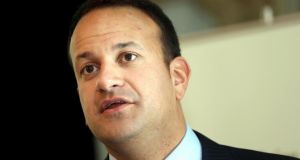 Minister for Transport Leo Varadkar turned the sod on the Newlands Cross N7 flyover as well as the N11 dual carriageway from Arklow to Rathnew. Photograph: Dan Sheridan/INPHO

Work officially began today on a scheme which will allow motorists to travel the length of the island without having to stop, as the last traffic light between Cork and Belfast will be removed.

Minister for Transport Leo Varadkar turned the sod on the Newlands Cross N7 flyover as well as the N11 dual carriageway from Arklow to Rathnew.

The well-known traffic bottleneck at Newlands Cross through which some 80,000 cars pass daily,is the only remaining signalled junction on the N7/M7 route . The project will mean a continuous free flow of traffic between the M50 Red Cow interchange and Limerick city, Cork city, Kilkenny city and Waterford city.

The upgrade consists of a flyover at the N7 Naas road and R113 Fonthill/Belgard Road as it takes southbound traffic over the R113 road.

Mr Varadkar also turned the sod in Co Wicklow where a 16.5km stretch from Arklow to Rathnew will complete a motorway/dual carriageway between Dublin and Gorey.

It replaces a narrow, winding single carriageway road without a good safety record, with poor overtaking opportunities and without a hard shoulder in parts. The project includes a 24-hour service area on the N11 northbound north of Gorey.

The projects would remove “two serious bottlenecks which have caused untold delays to commuters, hauliers and road users over the years,” Mr Varadkar said. “The financing of these projects also represents a breakthrough for the Government in terms of new funding for roads,” Mr Varadkar said.

Both projects are due to be completed within two years. The National Roads Authority has warned of some traffic disruption later this year but has asked motorists to have patience.

Up to 1000 jobs will initially be created in construction phase, said Theo Cullinane chief executive of chief BAM which was awarded the PPP. There would be up to 50 staff employed during the 30 year operate and maintain contract, he said.