Sligo out to resurrect fortunes after post-Celtic Tiger implosion 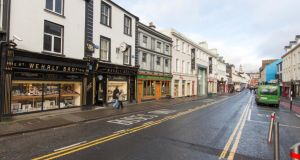 O’Connell Street in Sligo is set to be reordered in an attempt to afford more space to pedestrians. Photograph: James Connolly

Sligo rightly sees itself as the “capital of the northwest”, easily outpacing Enniskillen. With a royal charter granted in 1613, it defines itself as a “city” even though the population within the perfect circle that marks the urban boundary is fewer than 20,000 – a far cry from the European threshold of 100,000 for city status.

Designated as a development “gateway” under the 2002 National Spatial Strategy (NSS), Sligo has significant strengths – not least its unrivalled topographical setting, with Ben Bulben on one side and Knocknarea on the other, and the fast-flowing Garavogue river sweeping right through the town centre.

Borough architect Seán Martin notes that Sligo experienced a “dramatic period of change in the 19th century when our port, which could then be considered the equivalent of an international airport, was bringing trade, farming materials, plant, stock, coal and timber to and from Sligo”, generating local prosperity.

Much of this wealth was invested in fine buildings such as Sligo courthouse, the Town Hall, bank branches such as the superb Victorian Italianate Ulster Bank at Hyde Bridge, the Model School that lives on as the Niland Gallery and the former St Columba’s mental asylum, which is now an unusual Clarion Hotel.

Like so many other places in Ireland, though, Sligo lost the run of itself during the boom years. Hugely optimistic population projections were made and large tracts of land on the outskirts were rezoned for residential development.

Crazy prices were paid, even by the local authority, for land in areas such as Bellinode.

In town, river walks were laid out along both sides of the Garavogue, lined by new apartment buildings and old warehouses with cafes and shops at quay level. The old Silver Swan Hotel, at Hyde Bridge, was replaced by an angular glazed prow-like structure, The Glasshouse, Hotel, with a vacant eight-storey apartment block alongside it.

The N4 dual-carriageway was driven through the town centre, isolating Sligo’s cathedral from the railway station, and the envisaged “streetscape” along its length – intended to present a new face of Sligo – never materialised. Neither did the Treasury Holdings plan for a major shopping centre on the Wine Street car park.

Everything began to implode.

The twice-daily scheduled Aer Arann air service to and from Dublin ceased operating three years ago after its PSO (public service obligation) subsidy was withdrawn. Passenger numbers had plummeted to 26,000 a year – and it turned out that the subsidy was costing taxpayers €95 for each passenger.

On the plus side, Strandhill Airport – owned 50 per cent by Sligo County Council – is still the base for an Irish Coast Guard Search and Rescue helicopter and it is used regularly to fly out fresh shellfish to France.

The Dublin-Sligo rail service has also been improved, with trains now running frequently, and more is promised.

Unlike Limerick, there is no specific new vision or strategy for Sligo once its county and borough councils merge, other than the current Sligo County Development Plan (2011-2017) and the borough’s Sligo and Environs development plan (2010-2016). These will no doubt be reconciled after the councils become a single authority.

Even though the borough did not have an independent corporation, Seán Martin believes that it will “not be so challenging to make transition” because there is not another big urban centre in the county; the new municipality of North Sligo would largely consist of the urban area and satellites from Ballysadare to Rosses Point.

It was a crop of unfinished apartments in Ballysadare and other such unlikely places that led the county council to impose a moratorium on further “multiple housing schemes” in 25 villages throughout the county. Co Sligo was also found to have high rates of housing vacancy – up to 23 per cent, if holiday homes are included.

Much unsustainable development can be traced to the Upper Shannon Rural Renewal Scheme (a brainwave of Charlie McCreevy), which covered south Sligo as well as Leitrim, Longford and parts of Cavan and Roscommon – fuelled by tax incentives that were kept going year after year, even when the building industry was in overdrive.

However, despite the inevitable crash, Sligo County Council has opted for a “high-growth scenario”, under which the population is projected to increase by more than 11 per cent to 72,838 in 2016 – a forecast that even the county plan concedes “may be too optimistic”; thus its zoning provisions are based on more cautious projections.

According to the plan, 235 hectares of land are needed to meet targets under regional planning guidelines – 195ha in the county and 40ha in Sligo itself. Yet the plan noted that there were 708ha zoned for residential development – roughly half-and-half between borough and county – “resulting in a gross excess” over the targets.

Of this excess, 337ha were downgraded to a new “strategic reserve” category – meaning that it would not get development consent unless all the zoned land was used up – and 150ha were actually dezoned.

More might have been, except for concerns that there could be a risk of landowners seeking compensation.

What the council sees as “essential to Sligo’s further growth” includes good road and rail links with other National Spatial Strategy gateways and with Northern Ireland, “secure air connections with Dublin and the UK” to consolidate lesser-used airports, ongoing development of the Atlantic Road Corridor and the faint hope of reopening the Western Rail Corridor.

New county manager Ciarán Hayes aims to turn Sligo into a “top-tier destination” in tourism terms and says he will be “tapping into” its assets to achieve this goal. One early step will be the reordering of O’Connell Street, Sligo’s main shopping street, to give more space to pedestrians – five years after cars were let back.

There are plans to designate the centre of Sligo as a business improvement district, with Gail McGibbon as its co-ordinator.

A native of Wine Street, she will be working with about 500 businesses in the town centre to improve its vitality, especially during and after this year’s All-Ireland Fleadh, which is being held there in August.

The Yeats Summer School has thrived for 55 years in a landscape that includes both Drumcliff churchyard, “under bare Ben Bulben’s head”, and the grey mansion where Yeats met Constance and Eva Gore Booth –

“The light of evening, Lissadell,/Great windows open to the south,/Two girls in silk kimonos, both/beautiful, one a gazelle”.

For Sligo County Council, however, Lissadell will have other, less happy, associations after it lost a lengthy court battle over rights of way that the Supreme Court finally ruled had never existed.