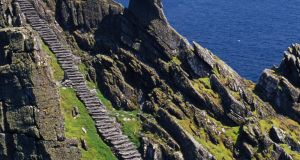 Skellig Michael, where the use of drones to capture film footage is seen as damaging to local bird life. Photographer: Design Pics / Gareth McCormack

A guide on Skellig Michael has expressed concern about State approval for use of a drone to shoot film footage over the Unesco world heritage site last week.

The Department of Heritage said it “raised no objection” to a request by Failte Ireland to use a drone on Skellig Michael as it would not have “any significant impact” on birdlife at this time of year.

It said no such permission would be given for Little Skellig, which is an internationally renowned gannet colony.

Tourism Ireland and Failte Ireland have been building marketing campaigns around the decision by Disney Lucasfilm to use Skellig Michael as a location for Star Wars in 2014 and 2015.

The 6th century monastic site off the Kerry coast is a national monument, and part of a special protection area for its colonies of puffins, Manx shearwaters and storm petrels.

A guide working for the Office of Public Works (OPW) said staff had been given instructions to remind visitors not to use drones, after several incidents this year. The OPW website also states the “use of drones on the island is forbidden” without its permission.

The guide expressed concern that the State approval for drone use would make this very difficult to enforce.

“How can we instruct the public not to fly drones if it will be clear that a tourism body has been permitted to do this extensively, not for scientific or research reasons as is normally specified in this highly sensitive location,” said the guide, who did not wish to be identified.

Failte Ireland said it secured all necessary permits, including Irish Aviation Authority approval, and the idea was to capture enough footage to last five or six years, in keeping with its “sustainable environment approach to developing the wild Atlantic way”.

Birdwatch Ireland seabirds expert Dr Steve Newton said that the puffin and kittiwake colonies would not be affected at this time of year.