Scientists alarmed by rise in dolphin strandings on Irish shores 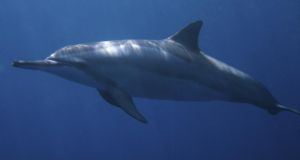 Scientists have expressed alarm at a recent spike in dolphin strandings which has seen almost 20 of the animals recovered on Irish shores in the last month.

The number of common dolphins stranded throughout the country since October is close to the amount that should be expected for an entire year, according to marine biologist Dr Simon Berrow.

“The number of dolphins we’ve had washed up in the last few weeks is shocking in terms of conservation and management,” said Dr Berrow, a member of the Marine Biodiversity Research Group at Galway Mayo IT (GMIT).

“Last year it wasn’t such a big issue, but this year we’re back up to a big peak in strandings. A lot of them have ropes around their tails, they have marks that are consistent with being caught in fishing nets,” added the marine expert, who was part of a team that performed an autopsy on the carcass of a female killer whale found in Tramore on Saturday.

“We’ve had 10 strandings of the Cuvier’s beaked whale which is really, really rare. We usually get one every few years, but we’ve had 10 over the last few weeks, and they’ve had six or seven in Scotland as well,” he said.

The discovery of the orca whale’s remains was regarded as an intriguing novelty by researchers, but the alarming increase in dolphin and Cuvier’s whale strandings – where the animals found are usually dead – has caused some consternation in the scientific community.

Figures compiled by the Irish Whale and Dolphin Group (IWDG) illustrate a marked increase in common dolphin strandings since 2010, when just five were reported here. There were around 100 sightings of stranded common dolphins in 2013, and following a lull early last year the numbers now appear to be on the rise.

Approximately 30 such incidents have been recorded since last October, according to Dr Berrow, but a lack of expertise means researchers can’t definitively say why the situation appears to be deteriorating once again.

Ireland is one of the few coastal EU countries which does not have a dedicated post-mortem system for deceased marine animals, despite it having one of the largest whale and dolphin populations on the continent.

“The big problem is that there’s no official post-mortem programme in Ireland, so when these things happen we don’t know the cause of death.

“These things get washed up and we say ‘wow, this is really, really unusual, something’s happened offshore’ but we can’t then follow up and say this is caused by fisheries interaction, pollution or anything else because we don’t know ... We need to address it to be honest because these animals are dying,” he said.

Latest estimates by the IUCN conservation red list puts the number of common dolphins on European continental shelf waters at just under 64,000. Conservationists have cautioned against the use of purse-seine nets by fishing trawlers, which can accidentally entangle and injure the animals.

Elsewhere, the body of a killer whale which appeared on a beach in Tramore on Friday has been removed, and its organs are now being examined by specialist researchers from GMIT and University College Cork.

It is now believed that the specimen was one of a mature rather than a young female but uncertainty remains over the cause of death, which was initially thought to be malnourishment.

Studies will be carried out on its intestines and blubber over the next few weeks, and it is hoped that the results will provide a rare insight into the marine environment in which the whales reside.