Remediation for pyrite damaged houses to start next week 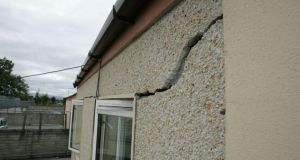 A 2009 photograph of a house in Finglas, Dublin, shows severe cracking due to pyrite in the cement. Photograph: Frank Miller.

a €10 million State-funded remediation programme from next week, seven years after the problem first emerged.

More than 10,000 homes were identified by the Pyrite Resolution Board as having been damaged by “pyritic heave”, where the presence of the mineral in the foundations has caused subsidence and cracks in the structure.

To qualify, properties must be assessed by the board’s “damage verification process” as having significant damage due to pyritic heave.

Who qualifies?
Only homes built and completed between January 1997 and December 2013 in Meath, Kildare, Offaly and the Dublin local authority areas of Fingal and Dublin city – areas where pyrite has been found in housing – qualify for the scheme.

Those who bought homes since last December will not be entitled to apply as they “knew or ought to have known” the dwelling was constructed using hardcore containing pyrite.

Since the problem was identified in 1997 the effects of pyrite have made some properties uninhabitable, but the scheme does not compensate owners for work already undertaken.

A grant of up to €3,000 will be available for temporary accommodation, and €2,500 for storage while work is carried out. The work involves removal of the concrete ground floor and all under-floor hardcore. It is likely to damage fittings such as toilets and showers as well as tiles and kitchen units.

Replacement will generally be on a “like for like basis”, determined by the Government’s Housing Agency, following consultation with the homeowner. Items deemed “expensive or difficult to source” will be replaced by those of a “good serviceable quality” under the terms of the scheme.

Industry levy
The Government had planned to levy the insurance and quarrying industries for the cost of repairs but Minister for the Environment Phil Hogan last year announced that, following legal advice, the levy could not be applied and the State would have to foot the Bill. Since then 970 people have registered an interest with the board’s website to be notified when the scheme comes into operation.