Prolonged unsettled spell to bring summer days to an end 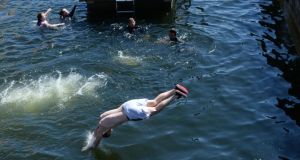 Swimmers make a splash in the Spencer Dock area of Dublin’s Docklands during the recent good weather. Met Éireann has warned the hot spell is about to come to an end. Photograph: Dara Mac Dónaill/The Irish Times.

Gloomy weather is on the horizon as Ireland settles back into more familiar summer weather following the sunny spells and high temperatures of recent days.

Met Éireann is forecasting a prolonged unsettled spell for most of the country over the course of the next week with all areas affected by rain, along with the occasional thunderstorm, over the coming days and weekend.

“Wednesday signals a real breakdown in the weather with a cloudy front bringing rain and drizzle over the north of the country, which could develop into heavy showers for Connaught and Munster with the risk of thundery downpours as the day moves on, although it may still hit 20 degrees in the south east,” said Met Éireann forecaster Eoin Sherlock.

“Thursday will see a continuation of the cloudy weather with yet more outbreaks of rain, although parts of the midlands may remain dry with temperatures staying around the 15-19 degree region.”

That’s not the worst of it, however, as daytime temperatures may dip to about 13 or 14 degrees heading into a largely disappointing weekend, with a continued deterioration in conditions expected for the start of next week.

“Low pressure is set to move in off the south west coast late on Thursday, bringing rain to Munster and the rest of the country over the course of the day. Cooler conditions will persist, with temperatures hovering around 13 to 15 degrees for the majority of the country on Friday,” he said.

“There will be more rain on Saturday, with Ulster faring the best with some dry weather. Sunday should see showery conditions easing off slightly with some bright spells possible and temperatures of 14-18 degrees, but the unsettled weather should return for the start of next week.”

Although there is some uncertainty over upcoming weather patterns, it looks unlikely to resemble the predictions of New Zealand’s renowned alternative weather forecaster Ken Ring, who anticipated a balmy final week for June with the possibility of record highs on Friday. If only.