Queen Elizabeth, the Duke and Duchess of Cambridge, Prince Harry and other members of the British Royal family have attended the annual Chelsea Flower Show. Video: REUTERS 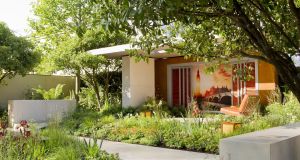 Paul Martin’s garden is described as a calm space to reboot after a busy day at work.

Mr Martin, who has designed for almost 30 years, created The Garden of Mindful Living for Vestra Wealth focussing on health and healing.

It was the designer’s first time on Chelsea’s prestigious main avenue, occupying a prominent spot next to the showground’s famous floral marquee.

Mr Martin was inspired by his love of far eastern travel and yoga in his creation of the garden.

The garden is described as a calm space to reboot after a busy day at work.

The elegant contemporary design features plenty of green, an airy garden studio among the large multi-stemmed trees and clean lines.

Mr Martin said he was excited to win the award and wanted to thank his team who had worked “tirelessly” to deliver a “very high standard” garden.

“I am thrilled and delighted to win gold with our first major show garden on the main avenue at Chelsea Flower Show. It’s a great golden morning at Chelsea,” he said.

“I want to thank fellow Irishman David Scott and Vestra Wealth who have steadfastly supported us over five years.”

The five day event from May 24th to May 28th is held on the the grounds of the Royal Hospital Chelsea.

This year features a display of thousands of crocheted poppies, an acoustic garden as well as a floral arch to mark the 90th birthday of Britain’s Queen Elizabeth.

The Queen and her family visited the world famous horticultural show in an annual royal tradition on Monday.