Ozone layer on the mend thirty years after CFCs banned 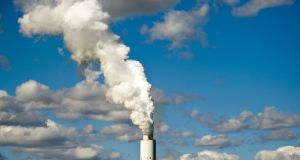 A treaty signed internationally in 1987 began the phasing out of CFCs - chemicals harmful to the ozone layer. Photograph: Chuck Eckert/Getty Images

Nearly three decades after the world banned chemicals that were destroying the atmosphere’s protective ozone layer, scientists said Thursday that there were signs the atmosphere was on the mend.

The researchers said they had found “fingerprints” indicating that the seasonal ozone hole over Antarctica, a cause of concern since it was discovered in 1984, was getting smaller.

Although the improvement has been slight so far, it is an indication that the Montreal Protocol, the 1987 treaty signed by almost every nation that phased out the use of chemicals known as chlorofluorocarbons, or CFCs, is having its intended effect.

Full recovery of the ozone hole is not expected until the middle of the century. “This is just the beginning of what is a long process,” said Susan Solomon, an atmospheric chemist at the Massachusetts Institute of Technology and lead author of the study, published in the journal Science.

Ozone high in the stratosphere protects life on Earth by absorbing damaging ultraviolet rays from the sun. But ozone is destroyed by reactions with chlorine and other atoms that are released by CFCs and similar chemicals, which were used for decades as refrigerants and propellants.

More ultraviolet radiation leads to increased incidence of skin cancers, cataracts and other health problems. Scientists who pushed for the treaty always acknowledged that recovery of the ozone layer would be very slow, because CFCs linger in the stratosphere for a long time.

“Think of it like a patient with a disease,” Ms Solomon said. “First, it was getting worse. Then it stopped ? it was stable but still in bad shape.” Now, she said, “as molecules slowly decay away from the atmosphere, it’s getting just a little bit better.”

David Fahey, a research physicist at the National Oceanic and Atmospheric Administration who was not involved in the study, said Solomon’s work “gives us a critical level of confidence that we are moving in the direction we want to see.”

It also reinforces that the Montreal Protocol has been a “resounding success,” Mr Fahey said. “It stands head and shoulders above any other environmental treaty.”

While ozone has been depleted in the Arctic and mid-latitude regions as well, the destruction over Antarctica is greater, in part because temperatures there are so cold. Technically, the depleted area is not a hole, but rather a large region of the stratosphere. In some years, it is larger than the North American continent, where the concentration of ozone is below a certain threshold.

Because the reactions that cause ozone to be destroyed require sunlight, this thinning begins each year in late August, when winter in the Southern Hemisphere is ending, and reaches its maximum by September and October. The ozone layer recovers later in the year, and then the cycle repeats itself.

Ozone depletion is a complex process that is affected by variables like temperature, wind and volcanic activity.

Ms Solomon and the other researchers looked at data from satellites and balloon-borne instruments taken each September. That made it easier to separate the effects of the decline in chlorine atoms from the other factors. They also compared the data with the results of computer models.

The study found that the ozone hole had shrunk by about 1.5 million square miles, or about one-third the area of the United States, from 2000 to 2015. This reduction occurred despite the effects of some volcanic eruptions, including one last year in the Chilean Andes that led to one of the largest holes ever measured.

Geir Braathen, a senior scientific officer at the World Meteorological Organization, said that the use of computer models by Ms Solomon and her colleagues was important. “Just looking at observational data, even if you see some hint of improvement, you can’t say if it’s due to ozone-depleting gases,” he said. “That’s why they used the models.”

A 2009 analysis by NASA scientists showed what the world would have been like had there been no Montreal Protocol, and CFC production and use had continued. By midcentury, their simulations showed, the ozone hole would have covered the world, and at noon on a clear summer day in a city like New York, the UV index, a measure of the damage the sun can do, would have caused a noticeable sunburn on unprotected skin in 10 minutes.

That dire situation has been avoided thanks to the collective efforts of society, Solomon said. “We are seeing the planet respond as expected to the actions of people,” she said. “It’s really a story of the public getting engaged, policymakers taking action, and business getting engaged.”