Names of those hoarding land to be published on register

More than 60 hectares of vacant land, spread across 280 sites, recorded in Dublin city 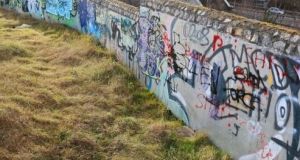 New register will for the first time make the details of vacant sites, including private and State-owned lands, available to the public. Photograph: The Irish Times

Dublin’s “land-hoarders”, who own vacant land in the city that could be used for housing, will have their names published on a new vacant sites register from next year.

An annual levy of 3 per cent on the market value of unused development land was introduced under the Urban Regeneration and Housing Act signed into law last year.

However, as previously reported in the Irish Times, site owners will not have to pay the levy until 2019.

The levy was introduced to stop the owners of vacant sites in Dublin city and other urban areas, that could be used productively particularly for housing, from hoarding land for its “hope value”.

Dublin city alone has more than 60 hectares of vacant land, spread over 280 sites. The new register will for the first time make the details of those sites, including private and State-owned lands, available to the public.

Any land over 0.05 of hectare in size, excluding gardens, which has been vacant for more than 12 months will be considered for inclusion on the register.*

The local authority will then determine whether there is a need for housing in the area for which the land being left vacant could be used; or whether the site is having an adverse effect on the surrounding area, because of antisocial behaviour, or the condition of land or any structures on it.

The council will also consider if there was a reduction in number of people living in the area as a result of the existence of the vacant or idle land.

Site owners will be given notice before their land is entered on the register and their rights of appeal will be outlined. The council’s decision can be appealed to An Bord Pleanála.

Local authorities will have to use the funds collected through the levy for the provision of housing or other amenities in the local vicinity of the vacant site.