High-speed link from city to airport to cost €2.4bn and take over a decade to build 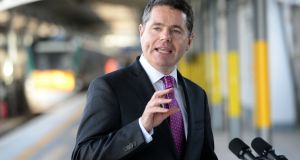 The new Metro North line is substantially similar to the metro plan shelved by the Government in 2011 - but will cost €1 billion less, Minister for Transport Paschal Donohoe has said. Photograph: Eric Luke/The Irish Times

Metro North, the high-speed rail link from Dublin city centre to Dublin Airport and Swords, is to go ahead at a cost of €2.4 billion - but will take more than a decade to complete.

The revived metro scheme was the centrepiece of the Government’s capital plan published on Tuesday, which commits investment of €10 billion in transport projects over the next seven years.

The metro will have the capacity to bring almost 10,000 passengers an hour from St Stephen’s Green to the airport, in under 20 minutes.

The new line is substantially similar to the metro plan shelved by the Government in 2011 - but will cost €1 billion less, Minister for Transport Paschal Donohoe has said.

“This new project will run along the same route as the previous [planned] metro but will feature fewer stops and will be built more cost effectively...The old version was always shrouded in many different level of secrecy, but this project will save approximately €1 billion euro versus the last project.”

The bulk of the savings are expected to come from reducing the amount of tunnel used as part of the 17km line from approximately 10km to 8.5km. Two stops planned for either end of O’Connell Street, one at O’Connell Bridge and another at Parnell Square station, are being scrapped in favour of a single station on O’Connell Street. 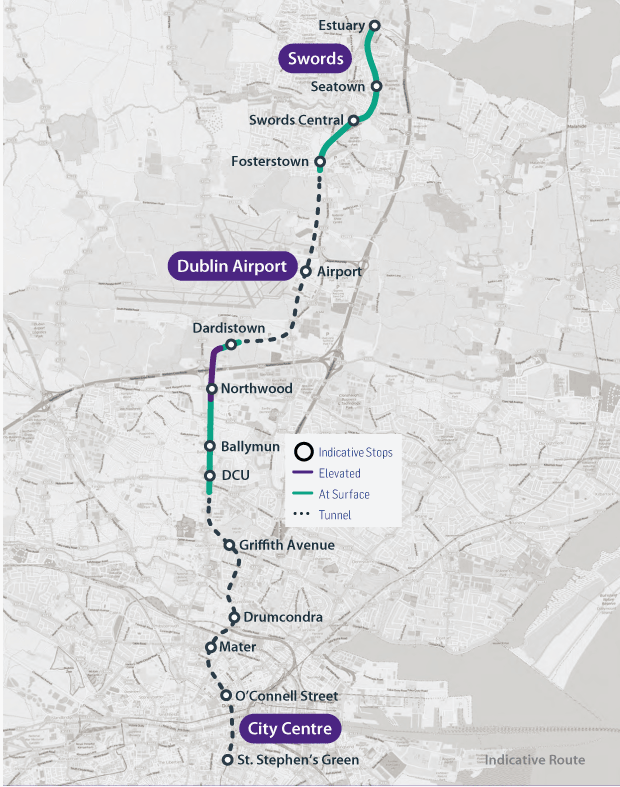 Savings are also expected through cutting the length of elevated structure by running the line at street level in Swords, having smaller stations with shorter platforms, and shorter trains.

Despite running along the same route as the previous scheme, the new line will need to be planned from scratch and the old “railway order” - the planning permission granted for the line by An Bord Pleanála in October 2010 - cannot be reused.

However the €170 million spent on the previous metro, largely in its planning and design, will not be wasted, according to Mr Donohoe.

“A new railway order will be needed because of the changes I have announced today. The €170 million that has already been invested in the design of the old project - much of that will be used again to enable and support the design works that will take place.”

Work on the design of the new line is expected to start next year, but construction is not due to start until the tail end of this capital plan.

“I acknowledge up front this is a 10- or 11-year project that will take much time to deliver, but I have to make a decision on what is the right thing for the long-term planning for transport for our city and our country.”

Metro North was one of six options to connect the city to Dublin Airport assessed by the National Transport Agency and was judged the most economically advantageous scheme, delivering the highest benefit-to-cost ratio.

Extending the Luas Cross City line currently under construction from Broombridge to the airport had also been a strong contender, but it was discounted as it would prevent the extension of that line to Finglas in the future.

Metro North was initially proposed 15 years ago in the Platform for Change strategy developed by the Dublin Transportation Office.