Marine life in oceans has almost halved since 1970s 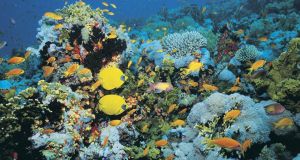 Marine mammal, birds, fish and reptile populations have almost halved since 1970, according to a report which is a “wake-up call” to tackle the crisis in the world’s oceans.

The study by conservation group WWF and the Zoological Society of London looked at how 5,829 populations of 1,234 species of marine creatures had fared in the past 45 years and found a 49 per cent drop in numbers in the face of over-fishing and habitat loss.

Some species people rely on for food are faring even worse, such as the Scombridae family of fish which includes tuna and mackerel have fallen by almost three quarters (74 per cent).

Sea cucumbers, which are prized as luxury food in Asia, have been significantly exploited, with a 98 per cent decline in the Galapagos and 94 per cent drop in the Egyptian Red Sea in just a few years.

Species found in UK waters including the porbeagle shark and the critically endangered leatherback turtle have seen numbers plummet, the report said.

Habitats are being affected by human activity, with an estimated loss of 29 per cent of seagrass area – important for food, stabilising the seabed and acting as a nursery for many species – since 1879, and mangrove cover down a fifth since 1980.

Climate change is also beginning to have an impact with carbon dioxide being absorbed into the oceans and making them more acidic which damages species with shells, warming seas are hitting corals and fish are having to shift their range.

Declines were most severe in the 1970s and 1980s, due to a “gold rush” as improved technology allowed increasing levels of fishing, and have largely stabilised since 1990, although there is evidence of new declines in the past few years, WWF said.

Despite declines slowing on a global level, experts warned populations were not at the levels they should be and were not recovering.

There are also significant variations between different regions and groups of species with recovery of numbers in northern latitudes, but falling in the tropics and subtropics.

The conservationists said there were steps that governments and consumers could take to reverse the declining trend.

Robin Freeman, head of indicators and assessments at ZSL, said: “This is a wake-up call, but it’s also an opportunity.

“These are populations that are smaller than they would be, and should be. They aren’t recovering.”

Louise Heaps, chief advisor on marine policy at WWF-UK, said: “As well as being a source of extraordinary natural beauty and wonder, healthy seas are the bedrock of a functioning global economy.

“By over-exploiting fisheries, degrading coastal habitats and not addressing global warming, we are sowing the seeds of ecological and economic catastrophe. But there are clear steps that all governments can take to restore our oceans.”

She said networks of marine protected areas, where some damaging activities such as types of fishing are banned or limited, needed to be created, and implementing the soon-to-be-agreed Sustainable Development Goals, one of which focuses on the oceans, would have an impact.

She also called for a strong deal to tackle climate change, which it is hoped will be agreed at UN talks in Paris at the end of the year.

And in the UK, consumers can play their part in reversing the damage to the oceans by ensuring all the seafood they eat is certified as sustainable by the Marine Stewardship Council and reduce waste and litter, which can end up in the seas, she said.