March likely to be one of the coldest on record, according to Met Éireann 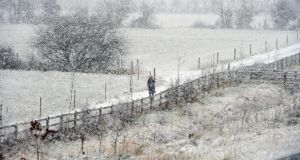 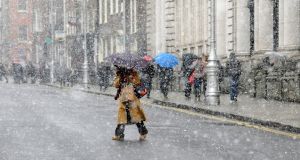 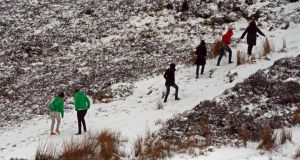 March is likely to be confirmed as one of the coldest - if not the coldest - on record when Met Éireann publishes its monthly figures tomorrow.

Temperatures were well below normal everywhere, according to preliminary figures. Indeed, the month was so cold that every weather station reported a warmer January than March.

Since February 18th, a high pressure area has been sending chilling easterly winds over the country.

In Johnstown Castle, Co Wexford, they were 4.2 degrees, the monthly average is 7.1 degrees.

In Mullingar, Co Westemeath, where theaverage for March is 6.4 degrees, the temperature was 3.1 degrees.

At Knock Airport in Co Mayo the temperature was a distinctly chilly 2.6 degrees, more than 3 degrees below the monthly normal of 5.7 degrees.

It was also an exceptionally cold Easter Sunday with lows of minus 1.7 degrees at Knock Airport and minus 2.1 degrees at Ballyhaise in Co Cavan.

Normally, monthly weather statistics are published on the first day of the following month, but they will not be available until tomorrow because of the Bank Holiday.

The bad news is that the unseasonably cold weather of the past six weeks will continue for the rest of this week. Temperatures will be no higher than 4 to 5 degrees.

The good news is that is finally looks like there will be a respite from the chilling temperatures, with indications that an Atlantic front will come in by the weekend bringing south-westerly winds and average temperatures of between 9 and 11 degrees.

All of northern Europe has experienced a colder March than normal. The UK Met Office confirmed that March was the coldest since the bitter winter of 1962 which lasted until the end of the month.

In Germany, March temperatures were 4.1 degrees lower than normal.

Berlin has had a covering of snow since March 10th and the average temperatures in the German capital has been 0.5 degrees for the whole month.