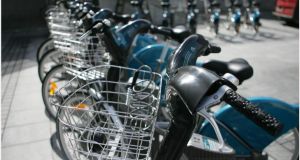 Some 950 new bicycles and 58 additional hire points are being rolled out. Photograph: Bryan O’Brien

A major expansion of the Dublin bike scheme begins today, with 950 new bicycles and 58 additional hire points to be in place by next July.

Two new bikes stations – at North Wall Quay in the Docklands and Deverell Place off Gardiner Street – open this morning and the existing station at Talbot Street is extended. A further 50 bikes will be added to the system today, bringing the total number of available bikes to 600.

In what is the first major expansion of the scheme since it started in September, 2009, the bike stations will gradually be extended to Heuston Station in the west of the city centre and the O2 venue at North Wall Quay between now and July 2014.

Under the original contract, advertising company JC Decaux provided 450 bicycles at 40 stations in exchange for the right to erect 72 advertising panels. Their immediate popularity meant the scheme was soon extended to 550 bicycles at 44 locations.

The new contract does not involve any additional advertising, instead the council will pay JC Decaux €1.925 million a year to run the service and maintain the bikes.

The council has secured €5.2 million from the National Transport Authority to cover most of the €6.1 million cost of installing the new stations. The annual subscription fee is to increase from €10 to €20 a year, or €2 to €5 for three days but the council does not propose to increase the hire tariffs, which include 30 free minutes.

However, it estimates it will need to find €500,000 a year to supplement the running costs. It hopes to secure advertising sponsorship to help reduce this cost. JC Decaux is currently in discussions with a number of “high profile brands” the council said, for a sponsorship package which would include joint naming rights, branding on bikes and associated infrastructure, and public relations and communications events .

Lord Mayor Oisín Quinn has ruled out the consideration of drinks companies as sponsors . The capital and operational cost has been estimated at €35 million over the next 15 years.

The expansion east and west of the city centre is the beginning of a 14-stage plan to bring the the scheme out into the suburbs with the eventual availability of 5,000 bikes.