IPCC: Cut emissions to zero by 2100 to avoid worst impact of climate change

UN scientists call for unrestricted use of coal, oil and gas to be phased out by end of century 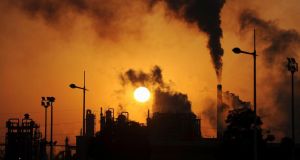 Global greenhouse gas emissions will need to fall to zero by the end of this century if the world is to avoid the most devastating impacts of climate change, according to the UN’s leading scientists.

In its latest report, released today in Copenhagen, the Intergovernmental Panel on Climate Change (IPCC) also calls for the unrestricted use of coal, oil and gas to be phased out by 2100.

The report warns that the world would face “severe, pervasive and irreversible” damage from global warming unless action is taken to reduce record levels of carbon dioxide and other greenhouse gases.

A synthesis of the IPCC’s fifth assessment report, it was compiled by 800 lead authors, 1,000 contributing editors and 2,000 expert reviewers, based on 30,000 scientific papers over the past five years.

Described by IPCC chairman Rajendra Pachauri as “very robust” in its conclusions, the report will now feed into UN negotiations aimed at concluding a new international agreement at the end of next year.

If world leaders are to achieve the agreed target of limiting global warming below 2 degrees, Dr Pachauri warned that time was running out and “the window for action is closing down very rapidly”.

But he held out the prospect that we could continue using fossil fuels for the forseeable future, provided that technology enabling carbon capture and storage was deployed at power stations worldwide.

“To keep a good chance of staying below 2 degrees, and at manageable costs, our emissions should drop by 40 to 70 per cent globally between 2010 and 2050, falling to zero or below by 2100,” Dr Pachauri said.

The report points out there are many options available to cut emissions, including using energy more efficiently, switching to renewable energy sources and investing in large-scale afforestation.

“Science has spoken with much more certainty and clarity than in the past,” UN secretary-general Ban Ki-moon told a press briefing in Copenhagen. Now, the baton was being passed to political leaders.

Building on the success of his recent climate summit in New York, he expressed optimism agreement would be reached in Paris next year. “I am confident we can do it. We can make it happen,” he said.

US secretary of state John Kerry targeted climate change deniers: “Those who choose to ignore or dispute the science so clearly laid out in this report do so at great risk for all of us and for our kids and grandkids.”

The IPCC report also makes clear that doing little or nothing in the coming decades would cost “much more” than taking the necessary action to cut emissions and help poorer countries adapt.

Both the UN secretary-general and the IPCC’s chairman both emphasised the need for “immediate and rapid” action to cut the emissions that scientists say are causing climate change.

Mr Ban described claims that climate action would cost dearly as “a myth” and likened the situation to parents faced with a child running a high temperature. “We have to first lower the temperature,” he said.

The report suggests renewable energy sources such as solar, wind and hydro will have to grow from around 30 per cent of electricity generation at present to a share of 80 per cent by 2050.

In the longer term, it says that fossil fuel power generation without carbon capture would have to be “phased out almost entirely by 2100” — a clear indication that “greener” electricity will be a key driver.

By 2050, Dr Pachauri said, “we will have to treble or quadruple the use of low-carbon or zero-carbon energy from renewables, and sources like bio-energy, nuclear and carbon capture and storage.”

The final text of the synthesis report was agreed at the IPCC’s 40th session after a week of dialogue in Copenhagen between scientists and representatives of more than 190 governments worldwide.