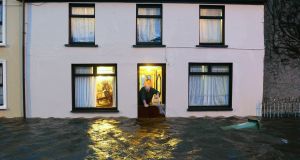 Against the odds: Michael Dennehy attempts to keep the water out of his Ballylongford, Co Kerry, home. Atlantic storm Ruth will move across Ireland today bringing gusts of up to 110km/h. Photograph: Domnick Walsh/Eye Focus

Fears are mounting Ireland’s major rivers will burst their banks this weekend ahead of a succession of storms building up from the Atlantic to hit next week.

Emergency services are on 24-hour high alert across the country, ready for immediate action amid warnings about gale-force winds and risk of flooding.

The National Emergency Co-ordination Group met yesterday to discuss ways to combat the threats posed from rising river levels and the impact of the number of storms that could sweep the country from next Tuesday to Friday.

Atlantic storm
As the heavy rainfall continues, Atlantic storm Ruth will make its way eastwards across Ireland today bringing gusts of up to 110km/h.

Brian Kenny, national director of fire and emergency management, said slow-moving rivers, including the Shannon, Barrow, Nore and Blackwater, were already swollen and at serious risk of overflowing in the coming days. “Everyone should take regard of the weather warnings as they’re issued and heed them,” he said.

Mr Kenny said people swimming in flooded waters, which can contain sewage, did so “with a lot of risk. Flood water by its very nature carries a lot of bacteria.”

‘Outrageous’
“It is absolutely outrageous that children are put at risk this way,” he said. “Nature is beautiful, but nature can be a beast. It can be a disaster. What appears to be a recreational and great fun can end in tragedy.”

Met Éireann has raised its warning for gale-force winds to orange for marine areas, which is the second-highest alert for capacity to impact significantly on people in the affected areas.

The national alert remains at yellow, which is a lower grade of warning telling people in risk areas they should be aware and prepare.

Local authorities are all on high alert with the Army and Civil Defence on standby.

Paul Crowe, director of services at Limerick City and County Council, said they would closely monitor the situation and keep in contact with the ESB regarding rising water levels on the lower river Shannon

Helen Faughnan, assistant secretary for the Department of Social Protection, said emergency clinics had already been set up around Limerick with more than 150 people looking for financial aid so far.

“It’s quite busy there,” she said, adding that the department had made 50 house calls to people in distress not able to get to the clinics.

A spokesman for Clare County Council said southeast Clare was particularly “vulnerable” near the Shannon and urged residents to be careful.

Farmers
Minister for Agriculture Simon Coveney said with the unprecedented bout of bad weather he recognised the hardship being experienced by farmers as a result of very wet land and full slurry.

Mr Coveney said he wanted to reassure farmers help was there and not to be worried as his department would take a “common-sense” approach in relation to inspections.

He said, for example, where there had been severe storm damage, including broken fences or debris, they would not be penalised under the direct payment schemes.