Postbag bring news of of a pill woodlouse, a peregrine falcon and a corncrake 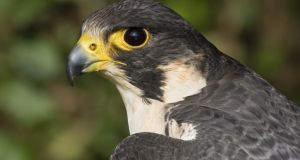 Peregrine falcon: there is a YouTube video of one attacking, or at least harassing, a red kite, in spite of the difference in size

My book doesn’t identify an attractive moth that I photographed. Any suggestions?

It is an angle shades moth. Its green areas may be replaced by brick red, as in your photograph. It rests with folded, wrinkled wings, like a dead leaf. Its caterpillars can be a pest when they feed on unopened buds.

While digging in my garden I came across an unusual woodlouse-type insect. It was a darker blue than the common type, and it curled up into a ball when disturbed.

It was a pill woodlouse.

In Rathdrum recently I was delighted to see a large raptor with the distinctive forked tail of the red kite encircling the sky high above. Then I noticed a peregrine falcon encircling just below it. Did the falcon intend to take out the kite when it reached a greater height?

I found a video on YouTube of a peregrine falcon attacking, or at least harassing, a red kite, in spite of the difference in size.

I heard a corncrake calling on Freyne bog, in Co Meath, on May 25th. When we were kids they were ubiquitous.

Eye on Nature has had two reports of New Zealand flatworms, from Tipperary and Donegal. Information on control is available at iti.ms/1UugpZe.