A red-legged partridge, cat v shrews, and a peregrine falcon 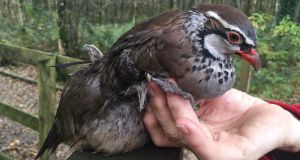 I found the bird in my photograph (above) shot in Coolattin Woods, near Shillelagh, in Co Wicklow. Could you identify it?
Esther De Groot
Bray, Co Wicklow

It is a red-legged partridge, probably reared, released and shot by a local gun club.

My female cat persists in killing our garden shrews, which are a protected species. Have you any ideas short of a muzzle when she goes out or must I continue to mourn the slaughter?
Dermot Kelly
Milford, Co Armagh

It is the nature of a cat to pounce on anything that moves. Some people put a bell on a cat to alert birds. Would a shrew pay any attention?

I was surprised by the activity (intelligence?) of a wasp outside a window with several spiders’ webs in the corners. The wasp approached one web, bounced off it and then, when the spider ran out to investigate, grabbed it and flew off. A few minutes later the wasp returned and used the same tactic to take a spider from another web.
Eoin Warner
Galway

I saw what I think may have been a hawk in flight, carrying prey, in Phibsborough. It soared up high and dropped it, then swooped down and caught it in midair. It repeated this three times. Was it playing with its prey?
John Lynch
Phibsborough, Dublin

It sounds like a peregrine falcon. Peregrines are known to play with prey, dropping it and swooping to catch it again.

Ethna Viney welcomes observations at Thallabawn, Louisburgh, Co Mayo, or by email at viney@anu.ie. Please include a postal address

1 Newcastle tragedy: Father says ‘every breath is a struggle’ after deaths of children
2 Taoiseach says Catherine Noone apology is ‘good enough for him’
3 Hospital apologises as man settles case over leg amputation for €810,000
4 Detective Garda Adrian Donohue murder trial delayed after jurors drop out
5 Rapist returned to prison after pleading guilty to burglary charges
Real news has value SUBSCRIBE