ESB warns of Cork floods as it releases water from dams 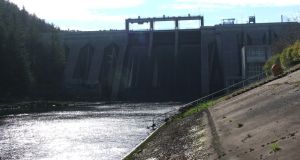 In November 2009, the ESB discharged large volumes of water from Inniscarra Dam which led to the River Lee bursting its banks downstream and extensive flooding in the western reaches of Cork city with the estimated damage totalling about €100 million. Photograph: KGalvin/Wikimedia Commons

The ESB has warned that there may be flooding of roads and lands upstream of Cork city over the coming days as it increases discharges from its dams at Inniscarra and Carrigadrohid on the River Lee to cope with the torrential rain of the last few days.

The ESB has confirmed it is monitoring water levels at both Carrigadrohid and Inniscarra reservoirs closely and that it began spilling water at a rate of about 125 cubic metres per second at Inniscarra on Wednesday, December 2nd.

In November 2009, the ESB discharged large volumes of water from Inniscarra Dam which led to the River Lee bursting its banks downstream and extensive flooding in the western reaches of Cork city with the estimated damage totalling about €100 million.

The ESB argued amid much criticism that it had no option but to start discharging large volumes of water from the Inniscarra reservoir to prevent the dam from bursting when it would have been unable to control the volumes of water flooding down into Cork.

But in October, the High Court ruled in a case brought by University College Cork that the ESB was 60 per cent liable for the estimated €20 million worth of damage caused to UCC properties along the Western Road.

The ruling by Mr Justice Max Barrett left the company exposed to hundreds of other claims totalling tens of millions of euro but the ESB has since lodged an appeal against the judgment.

Monday’s increased discharge of 180 cubic metres compares with a situation on November 19th, 2009, when the ESB began to discharge water at a rate of 535 cubic metres a second to avoid uncontrolled flooding as water was entering the catchment at 800 cubic metres per second.

Commenting on the current situation, the ESB said it was continuing to monitor the situation and was in communication with both Cork City Council and Cork County Council and other agencies in keeping with its normal operating procedures.

“We expect to continue to spill at Inniscarra Dam over the coming week to draw down reservoir levels. There may be associated flooding of roads, land and property adjacent to the banks of the River Lee downstream of Inniscarra,” said the ESB in a statement.

Northern Ireland reports 220 new cases of Covid-19 14:54
Bus Éireann to shut many inter-city routes due to financial pressures 14:34
Gardaí want to talk to three males over alleged rape in Mayo 13:58
Substantial increase in overseas travel last month 13:48
Coronavirus cases rise in most counties but rate of increase is slowing 13:39