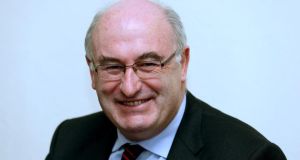 Minister for the Environment Phil Hogan: “Foremost in our considerations . . . will be the need to avoid any duplication or unnecessary overlap between the Dublin mayor and other public service bodies.” Photograph: Brian Lawless/PA Wire

Dublin city or county councillors could block the introduction of a directly elected mayor for the capital under the provisions of the Local Government Bill published yesterday.

The office, if created, would take powers from local authorities and State bodies, Minister for the Environment Phil Hogan said.

The Bill provides for Dubliners to vote next year on whether the city and county should have a directly elected mayor. However, the plebiscite will take place only if more than half the councillors in each local authority are in favour of it.

“There is a requirement for a resolution to be passed by all four authorities in order to hold the plebiscite,” Mr Hogan said.

Formulating proposals
A forum of members of the four Dublin councils, headed by the Lord Mayor of Dublin, Oisín Quinn, has been charged by Mr Hogan with formulating proposals for the new office and determining whether the mayor should be solely an ambassador for the city or have executive powers.

While he said he would not pre-empt the decisions of the forum, which is due to report this year, Mr Hogan gave his strongest indication yet that he favoured a mayor with decision-making powers.

The plebiscite, if approved by the local authorities, is scheduled to be held in tandem with local elections next May or June. If Dubliners decide to have a mayor then further reform of local government for the capital would be needed. “If you vote in favour of the office of directly elected mayor it has implications for the other local authorities.”

He said the Dublin electorate would have a “full picture” of the implications of the new office, including any cost implications, ahead of the vote. The powers which might be devolved from central government or State agencies would also be outlined before the vote.

“Foremost in our considerations of this will be the need to avoid any duplication or unnecessary overlap between the Dublin mayor and other public service bodies. Above all the cost implications must be clearly identified.”