Decontamination of soil and water sites to cost millions 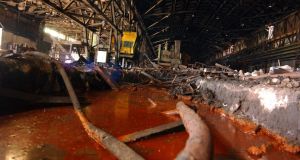 In 2005, the European Court of Justice ruled that Ireland had not complied with its obligations under environmental directives

The State could face a bill of more than €166 million to decontaminate soil and ground water at 34 sites.

More than €119 million has already been incurred, and an estimated €66 million could be required to clean up the sites, not including the future costs to clean up the industrial site at Haulbowline Island in Cork and the Kerdiffstown landfill fire in Co Kildare.

In 2005, the European Court of Justice ruled that Ireland had not complied with its obligations under environmental directives and ordered Ireland to take action to remediate contaminated sites including unauthorised landfills, licensed landfills and wetlands.