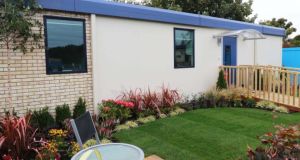 The four Dublin local authorities will view six samples of “cellular modular housing”, from six providers, which have gone on display. Above is the exterior of the Portakabin home. Photograph: Nick Bradshaw

Minister for the Environment Alan Kelly has said modular houses offered as a solution to the homelessness crisis will cost up to €100,000 each to construct.

Mr Kelly said he had visited the factory-built homes on display in Dublin on Monday.

“The quality is excellent. These aren’t cheap by the way. It’s not a cheap offering,” he said.

However, Mr Kelly said it allowed houses to be built quicker.

“If you are thinking years ago of your old prefabricated units that are in schools, there’s nothing like this. I would challenge many people even if they looked at them to differentiate between a normal house and one of these.

“That’s how good quality they are. Obviously they meet all the other requirements as well, as regards energy requirements and all that.”

Asked how long he envisaged families staying in such units, Mr Kelly said Dublin City Council was doing an analysis of them which would be ready next week.

“Obviously we’re only going to put people in here for a certain period of time, we want more permanent solutions, but the lifespan of some of these units is 60 to 70 years guaranteed.”