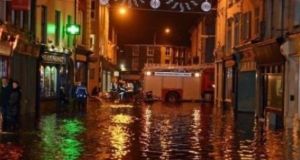 The OPW withdrew the original tender documents after a contractor threatened High Court action in 2014 but Mr Harris defended the OPW’s handling of the situation, saying he believed that the OPW had made the right judgement call on the issue.

Traders in Bandon in West Cork are threatening to withhold over €1 million in commercial rates from the local authority next year if work on a €10 million flood relief scheme for the town hasn’t commenced by the end of June 2016.

Aidan Holland of the Bandon Business Alliance has confirmed that some 64 businesses in the town have signed a pledge threatening to withhold commercial rates totalling €1.1 million from Cork County Council if work on the flood relief scheme has not started by June 30th next year.

Mr Holland acknowledged that the OPW is the lead agency in the provision of the flood relief scheme but traders would hold Cork County Council accountable for any delays and it would be the council who would lose out on rate payments if the work does not proceed as scheduled.

The flood relief scheme consists in the main of new walls and embankments, deepening the bed of the River Bandon by 1.5 metres through the town downstream for over 3kms, replacement of a pedestrian bridge, new fish passages as well as the construction of new pumping stations.

He expressed confidence that work would commence on the Bandon Flood Relief Scheme in May or June following the receipt of tenders by January 8th and the carrying out of the necessary review work on the successful tender.

Mr Harris’s predecessor, Brian Hayes had promised in 2011 and again in 2012 that work would commence on the project in 2013 but a threat of legal action by a contractor who did not make the initial short list, led to the tendering process having to be withdrawn leading to a 20-month delay

Mr Harris said he could not predict whether or not there will be any further legal challenges to the tender process but he had arranged for Cork County Council officials to work with the OPW and brief local public representatives on a monthly basis on the progress being made on the scheme.

But Mr Harris did acknowledge a call by the Bandon Flood Group to look at the issue of public procurement for flood relief schemes and he said the issue needs to be looked at by the European Union as it affects communities all over Europe who end up being flooded when delays occur.

“I’ve asked my colleagues in the office of Government Procurement, the OPG to work at a European level to look at the whole issue of procurement - remember Ireland is carrying out Catchment Flood Risk Assessment and Management Studies (CFRAMS) under an EU Flood Directive.

“The difficulties that we are operating under in Ireland in terms of public procurements must be experienced in other countries as well - I am meeting the OPG on Thursday and I want the OPG to work with European colleagues to look at ways of rectifying things.”

The OPW withdrew the original tender documents after a contractor threatened High Court action in 2014 but Mr Harris defended the OPW’s handling of the situation, saying he believed that the OPW had made the right judgement call on the issue.

One of the options that his officials would explore would the possibility of proceeding with a tender process even when there was a legal challenge as he understood that it was previously possible to do this under EU public procurement rules, he said.

Mr Harris said the OPW had agreed Cork County Council would carry out some interim measures including modifying flap valves to prevent waters coming up shores, sealing an embankment upstream of Lidl and procuring larger pumps but he ruled out interim dredging of the river bed.

“I am conscious of not doing anything that would affect the integrity of the tender and given dredging is such a large part of the flood relief scheme, you could actually invite another legal challenge and I want this tender to get on and be started with shovels in the ground in June.”