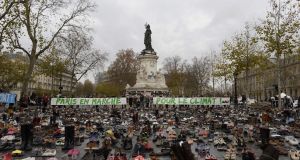 The Place de la Republique is covered in pairs of shoes in Paris, as part of a symbolic and peaceful rally called by the NGO Avaaz within the UN conference on climate change COP21. Photograph: Miguel Medina/AFP/Getty Images

Ireland faces fresh pressure from EU member states and the European Commission over its high level of agricultural emissions, Taoiseach Enda Kenny said ahead of the climate talks opening in Paris on Monday.

The Taoiseach said while Ireland secured a unanimous commitment by the European Council last year that its dependence on agriculture would be acknowledged in the calculation of EU emission targets, this was now being interpreted differently by the commission.

Speaking in Brussels on the eve of the COP21 summit, he said he had communicated to French president François Hollande that Ireland would sign up to “measurable and achievable targets”.

But he said there was “quite a deal of technical challenge ahead” for Irish officials in Paris to ensure the outcome was “fair and balanced and sustainable in Ireland’s case”.

France deployed 120,000 security force personnel nationwide for the duration of COP21. Nearly 3,000 police are stationed at the summit site at Le Bourget.

The French government had hoped to avoid violent demonstrations by invoking the state of emergency declared in the wake of the November 13th attacks. But dozens of men wearing dark clothing and hoods threw stones, bottles, flower pots and candles that had been left at a memorial for the November 13th victims at riot police, who used tear gas and charged the demonstrators. More than 170 people were detained overnight.

An unprecedented urgency surrounds the 12-day conference, because if action is not taken, it will become impossible to limit the rise in global temperatures to two degrees compared to the pre-industrial era.

“This COP21 will not be a real success unless the 195 countries gathered in Paris reach a universal and legally binding accord on the reduction of greenhouse gas emissions,” said Laurent Fabius, the French foreign minister and president of the conference. “That is the most complicated part.”

The word “binding” has created friction with the US and other parties to the conference. President Barack Obama would face stiff opposition from Republicans in Congress to a compulsory treaty requiring ratification. “The fact the accord must be ‘legally binding’ is not contested,” Mr Fabius said, “even if there can be different degrees of obligation.”

However he will insist the accord not “compromise our capacity for food production”. Agriculture accounts for 30 per cent of Irish emissions.

In what was hailed as a significant breakthrough for the Government, Ireland secured commitment at the EU summit of October 2014 that the “multiple objectives of the agriculture and land use sector, with their lower mitigation potential”, should be acknowledged in EU targets on climate change.

Ireland argued that the country’s forests, boglands and other habitats that absorb carbon should be accounted for in the calculation of emissions to compensate for the high level of agricultural emissions.