Greenhouse gas emissions steaming ahead at 3 per cent a year 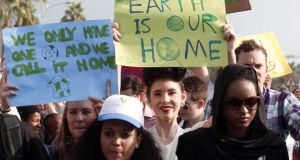 The Intergovernmental Panel on Climate Change is probably the largest international scientific and policy collaboration in history. Later this month the organisation, which is under the auspices of the United Nations, begins publication of its Fifth Assessment Report (AR5). More than 830 expert authors have contributed to this titanic project, with the final report running to thousands of pages.

You could, however, sum its findings up in just four words: “the world is defrosting”. This is how Prof Neville Nicholls of Monash University, Australia, put it. Human impacts, according to a leaked draft of the report, are changing the planet in ways “unprecedented in hundreds of thousands of years”.

Of course, we already know this, since its last report, issued in 2007 in a blaze of media publicity and political gesturing, set out the extreme dangers of a business-as-usual emissions trajectory for all life on Earth. Back then, the body warned the world’s leaders that we are now collectively supping at the last chance saloon.

Today, six years and a global recession later, instead of being reversed, greenhouse gas emissions are literally steaming ahead, at more than 3 per cent a year. “We’re heading rapidly in the wrong direction,” says Dr David Victor of the University of California.

Earlier this year, atmospheric carbon dioxide (CO2) levels breached 400 parts per million (ppm), their highest in at least three million years, representing an astonishing 30 per cent increase in the amount of this potent heat-trapping gas in the atmosphere in just 50 years. There is simply no historical analogue for changes on this scale happening so quickly. The time lag here is crucial. During the Pliocene epoch, fuelled by similar CO2 levels to today, global sea levels rose by a massive 20 metres.

This is only for starters. By mid-century, the world is on target to have doubled the pre-industrial levels of atmospheric CO2, to well over 500ppm. Global temperatures track CO2 levels closely, so we can expect average surface temperature rises of about two degrees by that time, with much more heating effectively “locked in” as a result of the climate system’s inertia being overwhelmed by what are known as positive feedbacks.

With this, the current 10,000-year interglacial period of generally mild, stable climate that allowed human civilisation and the agriculture that supports it to flourish will come to an abrupt end. To lock in this apocalyptic scenario requires nothing more than maintaining our present path just a short while longer. “The decisions we make in the next decade or so are decisions that will determine the fate of the planet for thousands of years,” says Prof Kerry Emanuel of MIT in Boston.

Oceans under assault
The oceans too are under assault. Acidification is “virtually certain” to increase, the organisation warns, and this “threatens the survival of entire ecosystems, from phytoplankton to coral reefs and from Antarctic systems . . . to many human food webs”. The scenario of acidified, oxygen-starved oceans teeming with jellyfish and almost nothing else is edging from science fiction to climate science fact.

Sea level rise is now projected to be in the range of one metre this century, but the rapid accumulation of CO2 means longer-term sea level rises of 5-10 metres and beyond are now looking increasingly certain. This means the abandonment over time of most of the world’s coastal cities and settlements and the loss of millions of square kilometres of land to future generations.

In hindsight, our seemingly benign pursuit of relentless “economic growth” may come to be seen as the most dangerous ideology ever to bewitch human society.

Any hope that the report may err on the side of alarmism is misplaced. For instance, the real-world rate of disintegration of the Arctic ice mass is currently some three decades ahead of the organisation’s conservative model projections. Controversially, the report actually excludes modelling of the effects of melting Arctic permafrost, which has the potential to add enormous additional methane emissions and move the needle much faster than the panel’s published projections.

“The best lack all conviction, while the worst/Are full of passionate intensity,” WB Yeats wrote in The Second Coming. He could have been describing the forces ranged today on either side of the battle to save humanity from its own hubris.

In one camp are the billionaire energy and media moguls spending freely to buy off politicians, subvert regulatory oversight and befuddle the public. The recent election of a new Australian government headed by a climate change denier in the pocket of demented tycoons Rupert Murdoch and Gina Rinehart was another timely reminder of the capture of politics by the trillion-dollar energy industry.

Deadly undeclared war
Closer to home, Murdoch’s Sunday Times recently ran a wildly inaccurate spread under the lurid headline: “The joy of global warming”. The neoliberal assault against public understanding of even the most basic scientific facts may yet turn out to be the world’s deadliest undeclared war.

In January 2008 I witnessed Fine Gael’s Simon Coveney deliver a powerful, passionate speech in Dublin, in which he demanded the Fianna Fáil-Green Party government set “ambitious targets” for emissions reductions, admitting to having had “my own worst fears confirmed” as to the scale of the climate crisis. This was, he added, “Ireland’s challenge, and we need to meet it”.

That was then. An older and no doubt wiser Coveney was recently quoted as stating that the EU’s climate change policy, the very policy he championed in 2008, “makes no sense to me, no sense on any level”.

The future of humanity itself cannot, it seems, compete with the more pressing short-term business of keeping the IFA sweet and a political career on track.

Coveney is no backwoods politician. On the contrary, he is smart, has a young family and doubtless knows the real score on climate change. When even this generation of leaders has abandoned us, you know it’s time to be very, very worried.

John Gibbons is a specialist writer on climate and the environment.
He tweets @think_or_swim