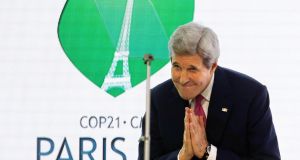 US Secretary of State John Kerry during a news conference at the COP21 conference in Le Bourget, north of Paris. Photograph: Stephane Mahe/AFP/Getty Images

Clear choices now face ministers at COP21 on all of the key issues – including whether to set the long-term goal of limiting global warming to 2 degrees, or a more ambitious 1.5 degrees – following the publication of a much sharper negotiating text by the French presidency of this crucial climate summit.

The latest text is shorter, at 29 pages, and has 75 per cent fewer square brackets indicating areas of contention than the turgid 54-page document that delegates were presented with at the outset. That, in itself, is a real measure of the substantial progress made by delegates at Le Bourget.

Released by the French presidency of COP21, the current version shows that agreement has yet to be reached on whether to aim to limit the increase in global temperatures below 2 degrees, “well below” 2 degrees or below 1.5 degrees – bearing in mind that it’s already up by 1 degree above pre- industrial levels.

Linked to this – indeed, inseparable from it – is how any of these “options” are to be achieved, in terms of reducing greenhouse-gas emissions, where there is also a range of options relating to the depth of such cuts and the timetable by which they might be achieved, either by 2050 or the end of the century.

The very fact that a 1.5 degree target is still mentioned in the text is quite a coup for countries most vulnerable to climate change. “I feel very energised,” said President Anote Tong of the Pacific atoll state of Kiribati. “There is now a very good chance of coming away [from Paris] with a positive agreement.”

Enele Sopoaga, prime minister of threatened Tuvalu, was also “very encouraged by the inroads we’ve managed to achieve in Paris”, saying: “We are all singing one song, to really address climate change, and we need to sing that song louder because there is still a big push in front of us [to conclude an accord].”

A mechanism to deal with “loss and damage” as a result of climate change also survives in the latest text, although the US delegation has made it clear that it will only go along with this if the most vulnerable countries are prepared to undertake not to sue the rich developed countries for compensation.

US secretary of state John Kerry referred to the “tough conversations” that are going on behind closed doors at Le Bourget. But given that it was all “about the future of the home we share”, he said the task was clear: to “get the job done.”

Kerry’s announcement that the US would double its aid to developing countries to $800 million (€730 million), to enable them to adapt to the impacts of climate change, has been greeted as a very positive move. However, even this is a small contribution towards ramping up climate finance to $100 billion (€92 billion) annually in 2020.

Climate Action Network Europe director Wendell Trio agreed that COP21 was now “at a crossroads” in terms of whether it would produce an ambitious deal or one that was “extremely minimalistic”. For example, the latest text contains no mention of emissions from international aviation and shipping.

But at least the word “decarbonisation” survives, even though it remains in square brackets. This is anathema to oil-producing countries such as Saudi Arabia and to others such as Australia with large reserves of coal; they would be the last to accept that such fossil fuel resources should be “left in the ground”.

The NGOs are all calling on the EU to “go out of its comfort zone” (as Trio put it) by embracing more ambition to cut emissions, show real solidarity with the more vulnerable countries and step up its own efforts over time. After all, Europe has already exceeded its own 2020 target to cut emissions by 20 per cent.

Given that the climate pledges made by 180 countries (including the poorest of the poor) are not adequate to achieve a 2 degree target, never mind an even more ambitious 1.5 degrees, one of the key issues yet to be decided is how these commitments can be revised over time – starting even before 2020.

The World Wildlife Fund has warned that if there is no such early revision of the pledges the world would be “locked into a trajectory of 3 degrees Celsius for at least 10 years”.

And this would undermine all the hopes invested in COP21.