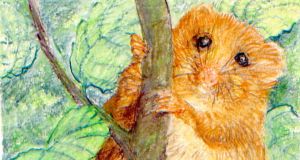 Any warm day someone out in a garden in Co Kildare will catch a glimpse of a mouse of a different colour – brightly tawny, golden or even chestnut red – and perhaps with the dumpy, diffident gaze of an animal just woken from its sleep. A rodent that looks like a mouse and behaves like a squirrel – the hazel dormouse – has now been added firmly to the list of Ireland’s wildlife.

This island has a long and haphazard accumulation of little furry mammals. The smallest, the pygmy shrew, probably came pregnant and tucked away beside a Mesolithic or Neolithic family in a skin-and-willow boat of the Stone Age. Fossil bones of the long-tailed field mouse date from around the same time, the black ship rat and house mouse arrived in the Bronze Age and the eventually ubiquitous brown rat disembarked in the 18th century.

The longer story has been assembled by Prof Ian Montgomery, of Queen’s University Belfast. His chronology appears in Mind the Gap, the record of a recent conference on postglacial colonisation just published by the Irish Naturalists’ Journal. And while he reckons most of the early arrivals are well worth looking after, he takes a rather different view of those brought in through human activities over the past 100 years .

Many of these, he argues, have been turning Ireland into “an ecological junkyard” because of their invasive impacts on our long-established species. The feral American mink attacks any mammal smaller than itself, the grey squirrel is ousting the red, the greater white-toothed shrew is displacing the little pygmy by competition and aggression, and so on. The flow of invasive species into Ireland since the 19th century has been even greater than in Britain.

The value of our long-established mammals lies partly in the way they have fitted in with, and helped to shape, Ireland’s natural environment. But they also have a value only lately revealed in the many surprises of DNA analysis. It was long assumed that Ireland acquired its mammals mainly from Britain. But the true genetic history of the pygmy shrew, pine marten, badger and so on has also shown traces of origins in Iberia and Scandinavia. Not only that, Dr Montgomery points out, but “they may retain genetic forms now absent from their source populations”. Indeed, he argues, the genetic diversity of long-established wildlife both in Ireland and Britain may help adaptation to climate change right across Europe.

Even Ireland’s new hazel dormice, Muscardinus avellanarius, have found a place among DNA revelations. The sightings and findings that began in 2010 in Kildare, home to Ireland’s horseracing industry, suggested origins in the regular traffic of horseboxes from England. The dormouse is well at home in the UK’s southern counties, at the hitherto northern edge of its widespread European distribution.

A biology team from Brighton University decided, however, to compare the DNA in hair and tail tip of dormice from Ireland, Wales and England, with samples from elsewhere in their European range. The Irish animal belonged not to Britain but to ancestors in France, from where Kildare racehorse trainers regularly import their hay.

It’s not the first time that dormice have arrived in Ireland. One November in the 1880s a prominent naturalist, Richard Barrington, “set free six healthy dormice which I received from London” beside a clump of hazel bushes near Bray, Co Wicklow. Nothing was heard of them again. The warmer temperatures of today’s climate change may favour survival and local expansion in midland Ireland.

Following the first discovery, in 2010, Emma Sheehy and Colin Lawton of the mammal ecology group at NUI Galway mounted a “citizen science” survey on Facebook, each sighting needing photographs or actual capture. Among the pictures were dormice curled up in a hibernation nest in an empty flower pot , and another feeding at a peanut holder. By the end of last year confirmed records had reached 14, all within 30sq km around Naas and Newbridge.

In a paper for the Irish Naturalists’ Journal (volume 34 part 1) the Galway team conclude that the animals have been present for at least seven years. They recommend nest tube surveys (which catch animal hair) in hedgerows and rural gardens that give dormice their most favourable habitat.

Hibernating from October until early spring, the dormice set about mating and having lots of babies – perhaps three litters a year, each averaging four blind and hairless young. Does this make them potentially “invasive”? In southern England they have a rarity blamed on the lack of modern coppicing in broadleaf woodlands, and conservationists have tried with limited success to breed them in captivity and release them in the wild.

Dormice like to live in small groups, normally at no more than 10 animals per hectare. They are active mostly at night, and their scurrying speed on the ground is a defence against owls, of which Ireland could probably do with far more.