Whose picket line is it anyway?

As teachers’ unions gather for their yearly conferences, it’s time to ask who they really stand for 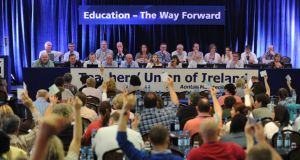 As ordinary teachers get set for summer term this week, a fight in their name is going on at teacher conferences in Kilkenny and Wexford. At the Easter gatherings, teachers will find themselves either defending their union or, like St Peter, thrice denying their masters.

How representative are these affairs, where a small minority of the teaching corps gathers to pick bones with the Minister for Education and to pitch issues at the media? Looking at the executive top table, they are not that representative at all. When we think of teachers we tend to think of women under 35, not a demographic often spotted on the dais.

In the past, congress often focused on issues related to older teachers; pensions were always a hot topic. Many attendees were retired teachers whose priorities bore no immediate relevance to the majority in the classroom.

It’s one of the challenges facing teacher union leadership: the very different needs of their members at different stages.

Newly-qualified teachers care about getting a job. Newly employed teachers tend to focus on educational issues such as in-service training. Mid-career teachers often have families and so pay and conditions loom large. Older teachers are starting to focus on retirement. It’s hard for a union to cover all bases and still communicate a message simple enough to digest.

Conference itself always presents a wide array of issues, everything from student mental health to pay cuts. Invariably, it is the conflict that makes the headlines: the moment when a livid delegate pounds the lectern, condemns the Minister and bays for industrial action. As a result, the teacher conferences have a reputation for being moanfests. There’s more to conference than giving out, but scraps make good copy.

Who votes for action?
Another PR challenge for the unions is the relatively low turn-out in ballots on industrial action. The primary teachers’ union, the INTO, reported a 65 per cent turnout in both the Haddington Road and Croke Park ballots on pay and conditions. It’s no worse than your average general election turnout, but when it’s liable to lead to the picket line, you’d imagine all members would be exercised one way or the other.

ASTI, one of the two post-primary teacher unions, had a 64 per cent turn out for the Haddington Road proposals, but in the most recent ballot on industrial action against the Junior Cycle framework, only 45 per cent of members returned a vote.

When results are tight, as they were in relation to Haddington Road across all three unions, it gives grist to the contention that ballot outcomes tend only to reflect the views of a third, or less, of teachers.

Radicalised young teachers
In the past three years there has been an observable increase in the number of young teachers attending conference as this cohort has become radicalised by worsening pay rates and dwindling job opportunities. The TUI now reports 30 per cent of its members are in part-time or casual contracts of less than full hours (see Change One Thing on the opposite page). Not all are getting behind their union though. The ASTI Fightback group is a regular feature at conference now, but it functions as an organisation within the organisation, and members make it their business to loudly upbraid union leadership.

The INTO has taken a different tack with its disenfranchised younger members; last month the primary teachers’ union held a separate conference, INTOYouth, in Castlebar, to focus on the concerns of younger teachers. There were 300 attendees and a Twitter feed and multimedia convention platform to hook remote under-35s.

TUI is following suit with a new youth committee.

Perhaps the least represented group at conference now is the so-called squeezed middle. Teachers with young families and immature mortgages can’t decamp to a hotel in the west of Ireland for three days during the Easter holidays. The few that you meet at conference complain that union activity, like so many other areas of public life, is not geared towards parents. It’s likely that the issues that trouble this mid-career cohort are not well represented at conference, and if the unions are to truly represent all their members, this is the next frontier.


Why I won’t be going to the teacher conference
Helen Bullock, part-time primary teacher, editor of crowd-sourced book How I Learn and blogger at anseo-a-mhuinteoir.com


I graduated from Hibernia College just over four years ago and have been working as a substitute primary teacher since then.

I haven’t joined the union. There is a membership rate for NQTs (newly qualified teachers) which is affordable. However, if like me they rely on irregular subbing work, having to pay €85 membership on top of the Teaching Council registration fees is not affordable.

I’m regularly told that I can’t comment on decisions made by INTO members regarding pay and conditions, but a lot of the cuts happened when I was in college so I didn’t have a say then either.

I would love the option to have a voice in how we’re treated because substitute teachers are still considered second-class teachers.

But the cost of that voice is a little high for someone, like me, who is considered unemployed.

I feel the INTO has let young and new teachers down so often over the years. All I see is that the INTO allowed class sizes to grow and allowed wages for younger teachers to be cut so we will never be on equal footing with older colleagues.

I’d love to see a new union option available for primary teachers so that we too have a choice as to which union to join, like our colleagues at second level.

Why I will be going to the teacher conference
Sarah Fleming, full-time primary teacher, member of the Curragh branch of the INTO
I was at congress last year and I found it very exciting. A lot of the motions that our branch prepared came up. As a newly employed teacher I am very interested in areas such as in-service training and improving resources for that. Early education and numeracy and literacy are very important to me as well. I was happy that our issues were aired last year. This year I will be interested to see if the executive made progress on any of the issues we raised.

Pay and conditions are not yet a big priority for me but I can see how they could become an issue when I get older. My priority now is to meet the needs of kids in my classroom.

It’s frustrating that teachers generally get bad press. Yes, there are plenty of rows at conference but I feel that debate is healthy. The Minister has brought in a lot of positive reforms. I just wish the resources and the backing were there. I don’t resent the fact that the executive are all a lot older than I am. I wouldn’t have the experience to do what they do. However, I do think the structures could be changed to encourage more young delegates to attend. You have to be nominated far ahead of time and many younger teachers don’t find out in time.

I think it’s really important for young teachers to get active in the union and there are more ways of doing that now, through social networks.