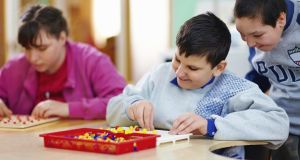 The whistleblower has been involved in the provision of learning support in a number of schools. Photograph: Getty Images

The Department of Education is being urged to investigate claims by a schools “whistleblower” that learning support hours designated for special needs are being redeployed to general management duties.

The individual, who has been working in the education system for over a decade and has been involved in the provision of learning support in a number of schools at second-level, has given details of the alleged practice to child rights solicitor Gareth Noble.

“I have been provided with credible information which suggests that in many schools concerns arise about teachers not providing those hours within school settings,” said Mr Noble.

“I am informed that, since the moratorium was imposed on middle-management positions, school authorities were finding it difficult to incentivise staff to act up and take on additional responsibilities without added pay.

“In lieu of salary uplifts, a practice has developed that as a reflection of taking on additional roles within schools, such teachers were not expected to discharge their duties in relation to one-to-one or group learning support teaching hours.”

Under a 2014 departmental circular, schools are allowed use resource hours for managing the provision of special educational needs, including meeting with therapists and other professionals.

The Irish Times spoke to a number of secondary school principals and school managers who expressed surprise at the claims, saying any such practices would be criticised locally.

In a statement, the department said it was “not aware of any widespread misuse of resource teaching or learning support hours by secondary schools”.

It says circular 70/2014 “makes clear that the additional teaching resources being provided must be used in their entirety to support students identified with special educational needs. In circumstances where such an instance of use of resource teaching/learning support hours for purposes other than those provided is brought to the attention of the department, it may have this matter reviewed by the department’s inspectorate division.”

The allegations come in the wake of a failed bid by the department to alter the role of Special Educational Needs Co-ordinators (Sencos) in schools so they would have to carry out other administrative talks.

It is understood the department made the proposal in talks with stakeholders during the summer on a new model for delivering resource hours, but it was forced to withdraw the plan amid strong opposition from management bodies.

Johanna Fitzgerald, a lecturer at Mary Immaculate College, Limerick, who has carried out research into the evolving role of Sencos, said teachers who hold these position are generally “swamped” with work because of the growing complexity of student needs.

“I think the department has not caught up with the transformation, particularly at post-primary level. The Senco role should be a standalone, ringfenced position in the school – within the mid-management structure.”

Tensions within schools over the moratorium on filling middle-management positions is set to increase after the ASTI secondary teachers’ union last week voted to instruct members to refrain from undertaking any unpaid duties associated with posts of responsibility.