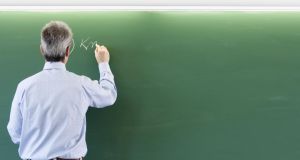 Long-awaited ‘fitness to teach’ hearings can’t be introduced until new legislation on garda vetting is in place, the Department of Education and Skills has said. Image: Thinkstock.

Long-awaited “fitness to teach” hearings can’t be introduced until new legislation on garda vetting is in place, the Department of Education and Skills has said.

Responding to criticism from the Ombudsman for Children this week about the delay, the department said it was “considering arrangements for the commencement” of Part 5 of the Teaching Council Acts which allowed for the introduction of disciplinary hearings for the profession.

“The Minister for Justice is currently progressing legislation through the Oireachtas which will provide a legal basis for the Garda Vetting Bureau. It is only when this legislation is enacted that Part 5 can be fully commenced,” the department said. “In the meantime, the Teaching Council is actively planning for the operationalizing of the Fitness to Teach provisions and it expects to have its arrangements in place within weeks.”

The council, which is the regulatory body for the teaching profession, said its preparations for the introduction of the fitness hearings were now complete.

“The timing of the commencement of Part 5 of the Teaching Council Act is a matter for the Minister for Education and Skills,” it said.

“Once Part 5 is commenced by the Minister, the Council will begin formally investigating complaints relating to registered teachers. Complaints can be considered on the grounds of professional misconduct, poor professional performance, convictions and being medically unfit to teach.”

The legislation states that by default hearings will be held in public. “However, a witness or the teacher who is the subject of the complaint may apply to have some or all of the hearing heard in private,” the council points out.

The fitness hearings have been mooted for well over a decade and the establishment of the council in 2006 was the first step towards their realisation.

Last year, the council, on which teachers have an in-built majority, recommended that a subcommittee be allowed to decide on a case-by-case basis the format of hearings. However, Minister for Education and Skills Jan O’Sullivan overruled this, citing the standard practice of public hearings in the medical and legal professions.