The leap to co-ed: ‘Mixed classes are a shock to the system’ 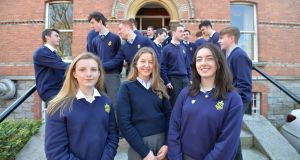 Ireland has a strong tradition of single-sex schools. More than a third of secondary schools admit only boys or girls, a figure that is significantly higher than most countries around the world.

For many years, the belief was that girls, in particular, did better when separated from boys. However, research on the relative merits of educating boys and girls together or separately is mixed.

Most studies ignore the voices of those best-placed to tell where they thrive best: students themselves.

Yet, students who have experienced both single-sex and co-ed schools are among the best-placed of all to share their insights.

That’s where St Conleth’s College on Dublin’s Clyde Road comes in. The college is unusual in that it is an all-boys school up to senior cycle, but admits girls in fifth and sixth year.

It is a tradition that began in the late 1960s, when young female pupils from Miss Meredith’s school on Pembroke Road who wanted to study maths and science rather than home economics for their Leaving Cert marched down to St Conleth’s and insisted on being allowed to join in the boys’ classes.

Several of the girls enjoyed the company of the boys and relaxed atmosphere of the school so much that they asked if they could join the school full time. Almost 50 years later, the practice continues.

Marina Burke is one of the new arrivals. Being plunged into an all-boys school was strange at first, but that feeling didn’t last long.

“It only took about two weeks to warm up so we didn’t feel like complete aliens,” she says. “A month in, you stop trying to put on make-up and you can come in a mess; the guys don’t care about our appearance very much. When you go out, you can do your hair and make-up, but in school you can leave it. It doesn’t matter. They don’t notice because we become almost like brothers and sisters.”

She says that although some parents were worried their daughters’ grades would plummet with the distraction of boys, they have no such fears now.

Hannah Collins has also enjoyed the change, having come from all-girls schools with a “hectic, highly strung and stressful atmosphere”.

“Girls in general take offence quicker than guys and hold grudges for longer. Here the boys treat us as equals. In my previous school I did well but I wasn’t pushing myself. In Conleth’s, it’s like we have a point to prove that we are as smart as the boys, so I want to stay on their level academically,” she says.

“There’s a lot of banter between the boys and the male teachers, and that’s relaxed and goes through the whole school atmosphere. It’s nice and it creates a lot of mutual respect.”

The smell of Lynx

Donal Ó Dúlaing, principal of the senior school, says the mix is helping the boys to understand how women and men work together.

“It also tidies them up a bit. The first thing you notice with fifth-year boys is the smell of Lynx. In the beginning they segregate, but within a week or 10 days they come together and they’re the same,” he says.

In addition, Ó Dúlaing feels there are striking psychological benefits from co-education. “The boys look after the girls. We rarely get problems such as bullying in fifth and sixth year. I think it’s something to do with the mix.

“I have experience with my own daughter, and school can cause a lot of pressure,” he says. “I think girls come into the school rigid in their ways, and almost everything has to be perfect. The boys are a bit more relaxed and that has a good influence on the girls. They’re serious about their work but not to an extent that it’s detrimental to their health.”

The co-ed experience at St Conleth’s has worked so well, he says, that the school board recently decided to extend the co- educational dimension to the whole school, from junior infants right up to sixth year.

It’s a big change for an establishment founded as a private boys’ school with a Catholic ethos in 1939.

Among institutions with a long history of boys-only education, you might expect some opposition from the long-standing staff members.

Ann Sheppard is a former teacher and principal of the school; her father established the college. As chief executive, she is committed to preserving its character – and is strongly in favour of co-education at St Conleth’s. She feels the girls are protected because of the size of the school (there are just under 400 pupils).

“They are able to express to the boys what is acceptable behaviour both verbally and physically and what is respectful and what is not.”

She thinks that the mix creates competition and that the boys and girls “sharpen each other both personally and academically because both don’t want to be outshone by each other”. She has noticed a healthy rivalry in fifth and sixth year and would expect the same thing to apply all the way through, now that the whole school is fully embracing the co-ed system.

The school is changing, but some traditions live on. Kevin Kelleher, a 94-year-old former international rugby referee, is still the headmaster and very involved in the day-to-day running of the school. He greets pupils in the morning, meets new parents and runs the tuck shop.

He also makes sure that the boys treat the girls with respect. When he opens the shop, for instance, the girls get favourable treatment.

“I bring the girls to the top of the queue at the tuck shop, so the boys can learn that it’s ladies first.”

ISOBEL NUGENT: ‘I’M MORE ABLE TO ASSERT MYSELF NOW’
“I was in a girls school for three and a half years. It was easy to fade into the background and there could be a lot of drama and ‘she said/she said’.

“If we were going out at the weekend or hanging out, there was a lot of judgment of other girls’ behaviour and how they dressed. It was very much about the social hierarchy: who is partying and who is allowed to go out and who is hanging out with the boys.

“The girls who attracted the boys weren’t doing anything wrong, but they were judged out of jealousy.

“Getting to know boys in a classroom is different to getting to know them socially. In a social situation they are only putting their best selves forward, whereas in a classroom you see them as a person. It’s more like the workplace. I think I’m much more able to assert myself now and I wouldn’t feel nervous speaking in front of a group of boys; they wouldn’t scare me.

“At the start, going from a completely female environment to somewhere so testosterone-filled was a shock to the system. I remember arriving in and the boys were so tall. I looked around and I couldn’t see if there were any girls in the place. But now my best friend is a boy and he’s brilliant.

“You have a view of guys as being macho, but he’s very kind. I can definitely see myself keeping in touch with him, as we were joking that I will be his best woman at his wedding.”