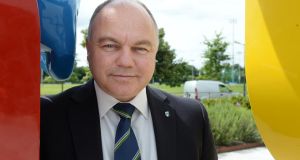 The student registration charge, which is set to hit €3,000 next year, has become a “barrier to higher education” and should be replaced with a student loan scheme, the recently appointed president of UCD has said.

Prof Andrew Deeks said, among the State’s seven university presidents, “it’s fair to say there is a shared view that the system is being underfunded at the moment if we are to remain world-class universities”. Prof Deeks was speaking following the establishment this week of an expert group to examine funding models for the sector in one of the final acts of Minister for Education Ruairí Quinn’s term of office.

“I’d see this as a barrier to higher education, and also a barrier that doesn’t need to be there because if you look at the systems now in place in Australia and the UK they allow the student to enter university without any up front cost, and then the student contribution is paid retrospectively . . .

“My personal view is that the contribution system that has worked in Australia for the past 20 years now provides a good model. It is a deferred payment of a debt, which is accumulated module by module as students progress through the course.

“I think that has an advantage over a graduate tax in that it means students are very aware of the programmes they are entering into, and the need to perform within those modules to get the benefit.

“So perhaps we should look more to Asia where they have picked the very best universities and then fund them to be research intensive.”

He said UCD planned to use more “blended learning” using new technology but “I don’t see us going a long way down the MOOC track”.