Annual conference of principals also told not one school had yet changed patronage since beginning of dialogue, in spite of significant parental support for move 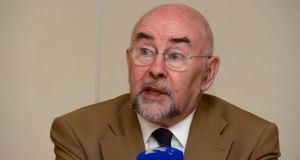 Minister for Education and Skills Ruairí Quinn: “Unfortunately the response is ‘yes, we agree in principle to the idea, but we don’t want this particular school or that particular school to change’.” Photograph: Alan Betson

Primary school teachers who are hard pressed to find enough hours in the day to address the school curriculum should consider switching time from religious instruction to providing literacy and numeracy skills.

That is the view of Minister for Education Ruairí Quinn who told the annual conference of the Irish Primary Principals’ Network yesterday that 30 minutes of discretionary time for the teaching of religion could be switched to core curriculum subjects.

Asked at the conference where teachers would get time to implement the initiatives he was planning – particularly one relating to improvements in literacy and numeracy, Mr Quinn said: “I would like it to be out of the 30 minutes a day for religious education.” When this was met with surprise in the room, he said it was merely a suggestion.

Mr Quinn also said he was disappointed religious institutions had not so far divested themselves of any primary schools, despite their stated intention of doing so. Under the terms of the Forum on Patronage and Pluralism in the Primary Sector, set up in 2011, dialogue between the religious institutions and the State was to address how existing primary schools could come under the patronage of a more diverse range of faiths and none.

At the time Mr Quinn said the aim was not to completely restructure the primary school system but to offer greater choice, reflecting a greater diversity of people in a more pluralist society. However, he told the principals that while 24 communities had been identified where sufficient numbers of parents desired an educate-together type school, no religious order had as yet divested itself of its patronage of any school.

Mr Quinn told reporters there had been a “poor response”. He said this had been conveyed to Fr Michael Drumm of the Catholic Schools Partnership.

The Minister said he would have liked to see more progress. “I think typically where you have towns of five, six or seven schools, one Church of Ireland shall we say, one Gaelscoil and six or seven primary schools – and some of them relatively small – it is not beyond the bounds of possibility [that a school be handed over].”

Mr Quinn said such a move would also enable remaining Catholic schools to fully and openly celebrate their Catholicism, because the parents who wanted their children in those schools had been given a choice.

While forum deadlines for dialogue had been met, “unfortunately the response is ‘Yes, we agree in principle to the idea, but we don’t want this particular school or that particular school to change’.” However he said the process was “just slow” and he did not think the religious were guilty of procrastination.