Leaving Cert exam on cusp of change – for past 40 years

"The annual sitting of the Leaving Cert is a spectator sport for the rest of the country. It is an outlet for mainly adult hysteria" 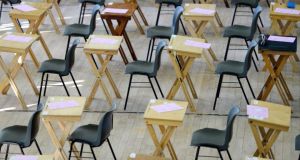 It’s good that the Dáil bar is doing well – profits up to €145,623 in 2012, which is such a relief – because the Leaving Cert doesn’t look so good. At the weekend they were stumbling out of pubs, restaurants and bars, bleary eyed with relief and alcohol. The boys were wearing their best shirts and the girls had put on eyeliner for the first time in weeks. These poor intoxicated souls were the parents of the people who’d done their Leaving, celebrating the end of their suffering.They were drawing their first free breath since the June bank holiday. “Thank God it’s all over,” they said.

When asked, on Friday and Saturday night, where their exam-taking offspring were, the parents replied that they had no idea, and several fathers said they didn’t care. The mothers shushed them, but you could tell that all the parents were getting giddy and had to let off steam. Who would begrudge them that much? Without over-dramatising what is already the most histrionic of exams, it has surely been a tough time in most candidates’ households.

Because, despite changes to the way some of the subjects are examined – Project Maths, anyone? – the culture of the Leaving Cert remains much the same. In a country of gamblers this make-or-break exam suits us very well. At the weekend the ending of it was reminiscent of the aftermath of a big football match. Is this a good thing? Discuss.

This is a society that likes dividing its citizens into winners and losers; the health system, the transport system, every State system in Ireland reinforces this divide in order to reassure the winners at every turn. If the Leaving Cert allows us to bring down the portcullis (look it up) when those citizens are hardly 18, so much the better.

The tension, the stress, the families on tiptoe, this year’s significant mistakes in the setting of at least two papers, the sheer grinding uselessness of it all... If we could lift our eyes from the abortion debate for a couple of minutes perhaps we could discuss what we want for our real children.

Because like the Dáil, the Leaving Cert has been on the cusp of change for 40 years. It’s just that nobody has got round to changing it. The discussion, on the rare occasions it is heard, is the same. The phrase “continuous assessment” has been wafting through the ether since I was at school, just like the phrase “Dáil reform”.

In an unprecedented development, and as one glacier overtakes another, it may turn out that the Dáil actually does reform well ahead of our exam system. Taking as your starting point the year 1975, please calculate the chances of that outcome.

Young people of Ireland: don’t listen when stupid older people tell you that this last month, this last year, this last six years in the secondary education system have been something that everybody has to go through. The annual sitting of the Leaving Cert is just a spectator sport for the rest of the country. It is an outlet for mainly adult hysteria. We also get to sigh and experience a wave of relief that we’ll never have to do it again – sorry about that.

This doesn’t mean the Leaving Cert was ever some important, traditional rite of passage for adolescents as they entered our complex and sophisticated culture. It was always useless. It was designed to identify, amongst others, candidates for steady jobs in the civil service and the banks. From a historical perspective that didn’t work out too well. Discuss.

The only thing that has changed over the decades, perhaps, is that parents are much more involved than they used to be, as they try and get their children over the social dividing line just as it is being drawn. Meanwhile adults in general are muttering in corners about how, if children can endure the stress of sitting the Leaving Cert, they can endure pretty much any examination in the future. This may well be true. At any event it seems to be the most positive thing any experienced grown up can say about the Leaving, that as an exercise in stress tolerance it is pretty well unbeatable. And the State exam system only costs us €60 million a year. Do you think this is good value? Give your reasons clearly.

It has always been said that the exam system in Ireland excludes many of the children that it does not suit, but that repetition does not change the fact that their options are still very limited. The Leaving also lets down many academically able children who could do much more than is asked of them. Both these groups of children suffer alienation and loss of confidence as a result. No wonder Irish children were recently shown to dislike school more than their European counterparts. It is a long time since anyone other than a politician touting for the placing of a foreign call centre here has praised our education system. Certainly parents don’t defend it.

In this way – convincing children to conform to a system that no one believes in, or even pretends to believe in – perhaps the Leaving Cert is good training after all.