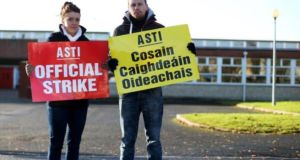 Additional payments to retiring school teachers are responsible for close to a quarter of the €103 million over-run in education budget, Minister for Education and Skills Jan O’Sullivan revealed. Photograph: Brian Lawless/PA Wire

Additional lump sum payments to retiring school teachers are responsible for close to a quarter of the €103 million overrun in the education budget this year.

Minister for Education and Skills Jan O’Sullivan gave details of the additional cost burden at an Oireachtas committee meeting at which she also announced a fresh bid to restart talks with teacher unions to avert further strike action over junior cycle reforms.

Explaining her department’s supplementary estimate, which would bring its allocation from €7,848.5 million to €7,951.5 million, she said an estimated 2,200 teacher retirements were planned for 2014 but the actual number of retirements was now likely to be more than 2,650.

Additional funding of as much as €25 million was required to meet the lump sum and pension costs of the extra retirees.

Retiring school teachers and principals are entitled to roughly 1½ times their salary in a tax-free lump sum, separate to their pension.

Concern was expressed at the committee meeting that retired teachers were being re-employed in schools, displacing graduates and part-time teachers.

Ms O’Sullivan said there was “definite discouragement” of this practice.

“We would monitor the practices of schools to ensure they are basically bringing in younger teachers rather than bringing back teachers who have retired,” she said.

In the last academic year, 113 primary and 82 post-primary retired teachers had been re-employed by schools.

The Minister said the main cause of this year’s budget overrun was a €77 million “technical accounting adjustment” arising from certain pension and salary payments.

The staggered nature of these payments meant they had to be accounted for in 2014 rather than 2013.

A further €1 million was required to cover the cost of the 25 per cent Christmas bonus for social welfare recipients announced in Budget 2015.

The €1 million will cover the cost of paying the bonus to some 18,000 participants on VTOS (Vocational Training Opportunities Scheme) courses and other ETB (Education and Training Board) programmes.

Those on the standard rate allowance will get an additional payment of €47.

Ms O’Sullivan said she was reallocating some funding for capital expenditure by using savings to fund spending mainly on the DIT Grangegorman site and on St Patrick’s College Drumcondra.

Ms O’Sullivan reiterated her disappointment at the decision by secondary teacher unions the ASTI and TUI to take strike action over what she described as a “generous and significant proposal” for reform.

“In an effort to avert industrial action and restart talks I will now ask Dr Pauric Travers, who chaired talks between both sides in November, to consult with myself, my officials and both teacher unions to see if the conditions for meaningful talks exist,” she said.

Talks chaired by Dr Travers collapsed last month after the Minister proposed the compromise plan that would see teachers assessing only 40 per cent of grades in the new Junior Cycle Student Award, which is due to replace the Junior Cert in 2017.

The unions are insisting that school-based assessment be removed from the plan in its entirety, and their executive members are meeting this Friday to decide when to stage a planned second one-day strike in January.